With charm of the traditional appearance, this teapot is not only suitable for daily usage but also for collection.

This Ding styled Yixing teapot presents a feeling of solemnity, tradition and mystery. Its feature is that the square shape is hidden in the round shape, so it appears bright and hard. The bronze cultural elements of this teapot are a very important part of Chinese traditional culture.

The Bronze Age is the second principal period of the three-age Stone-Bronze-Iron system. Chinese Bronze Age is the "period between about 2000 BC and 771 BC". In this period, People made many bronze artifacts, such as the numerous large sacrificial tripods known as “Ding” (鼎 in chinese). 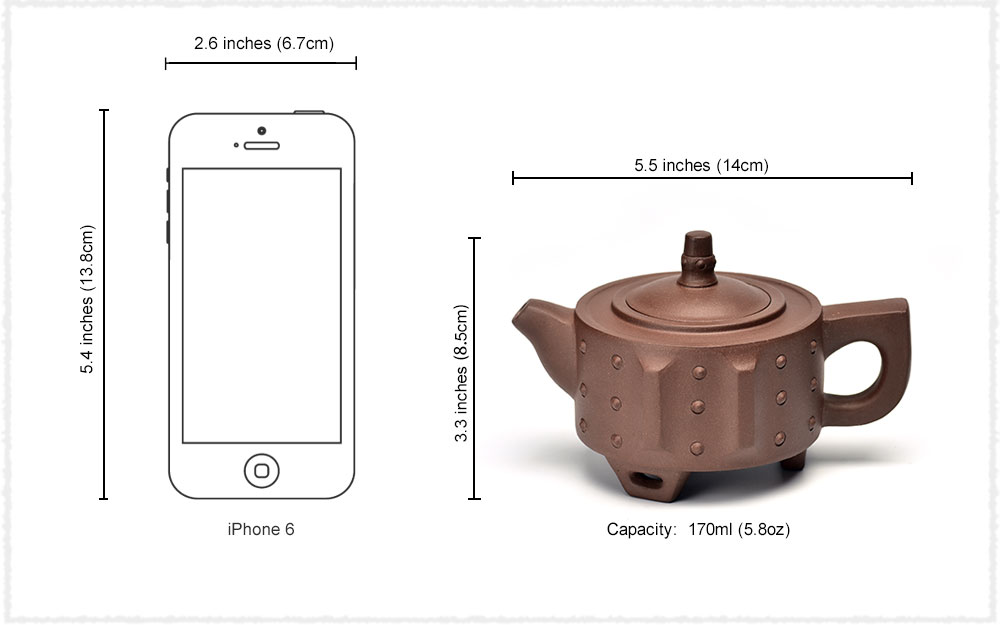 Qing Shui Ni: the ore of purple clay, a kind of hematite with much mica, a common mug in the early time. Because it contains relatively smaller ratio impurities than other material, and the big fire won't change its shape and glaze, it is widely used. And as it is mellow ruddy, it is also called red purple clay or Hong Qing Shui. The clay looks quaint, and after long time use the same teapot to brew the same teas, the taste of tea will be better. And there are many traditional models; both the makers and teapot lovers like to use this kind of clay.

The maker of this teapot is Wu Guoliang who is an excellent potter. He was born in Yi Xing which is famous for pottery. From his childhood he was interested in Yixing purple clay, and after he graduated, he went the first Zi Sha factory to learn how to make teapots. Educated by many famous potters, his teapots have all the advantages of other potters. The style of teapots that he made is unconventional, the lines are very smooth and the verve is very vivid.

Yixing County, the Pottery Capital of China, has a very long history of pottery making for around 6500 years. Yixing boasts abundant resources of argil, tea, bamboo and charcoal, all of which build the important material resource basis for making pottery. Yixing Zisha products have been awarded many prizes both in home and abroad, some excellent works have been presented as national gifts in international communications.