China is the hometown of the tea, it has not only a long history of the tea, but also there are a large square of the planting area, which is widely. Depending on the effect of district climate, social economic, tea culture ect, china can be classified into four area – south of china, northwest, regions south and north of the Yangtze River.

Tea-producing area in the Southwest of China

The Southwest tea-producing area is the oldest one, including the north-central part of Yunnan, the southeast part of Tibet, Guizhou, Sichuan, and Chongqing.

Yunnan is the famous tea-producing area in China, where Pu’er tea, Yunnan black tea and a few kinds of green tea are produced. Located in the Southwest of China, Yunnan borders upon Sichuan, Guizhou, Guangxi and Tibet, and neighbors Burma, Laos, and Vietnam.

Yunnan is called “Dian” for short.

Yunnan is located in low-latitude plateau where the special geographic location and complex terrain have great influence on the complicated climate. Most regions in Yunnan are warm in winter and cool in summer. The climate is spring-like all year long.

The locals in Yunnan not only like planting, producing and drinking tea, but also appreciate and love tea. Tea is used to entertain guests, fetch the bride, and give others as a gift. They create various ways to drink tea, such as cooking, baking and so on. 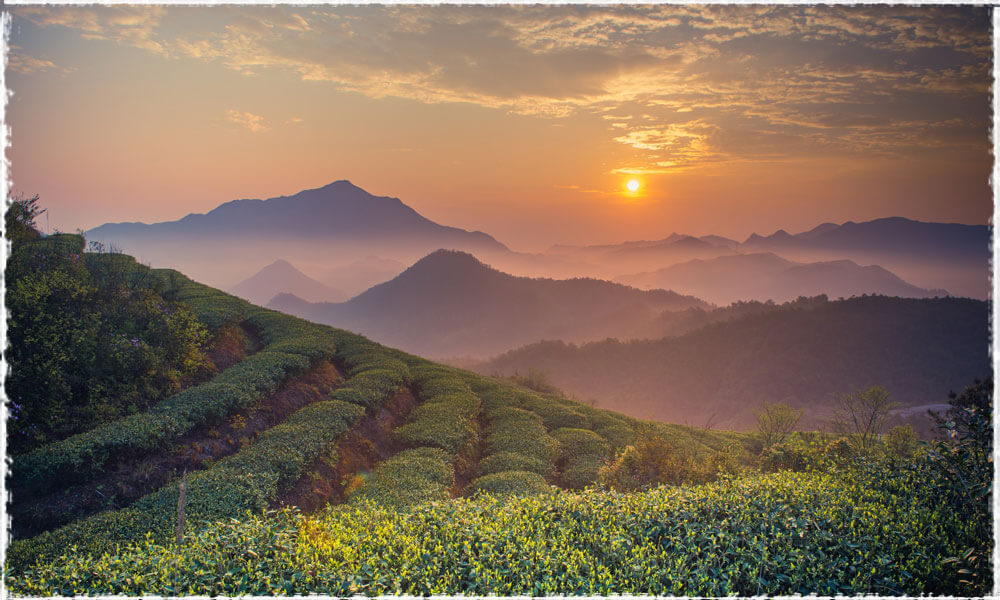 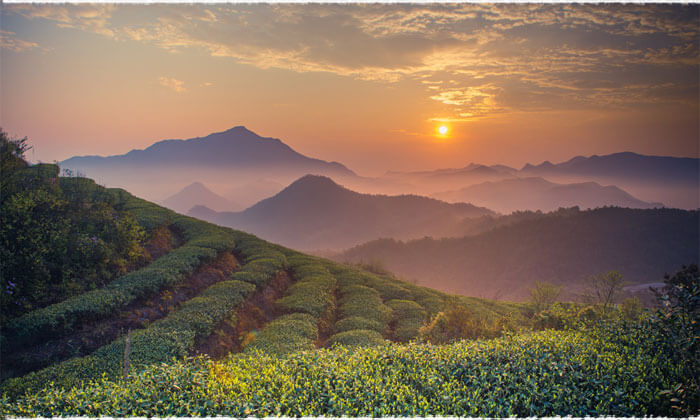 Each of five tea-producing areas in Yunnan is unique

The distribution of tea-producing areas in Yunnan

The West of Dian tea-producing area

Lancang-valley within China, including Dali, Baoshan, Lincang, Simao, Xishuangbanna is the cradle land of planting tea trees. Moreover, as the center of the cradle land, Lincang is the main tea-producing area in the West of Dian. Tea tree resources are very abundant in Lincang, which is honored as “the Historical Museum of Tea Resources”. Lincang is also the original place of Mengku large-leaved tea. It is worth mentioning that Fengqing large-leaved tea groups are noted in China. 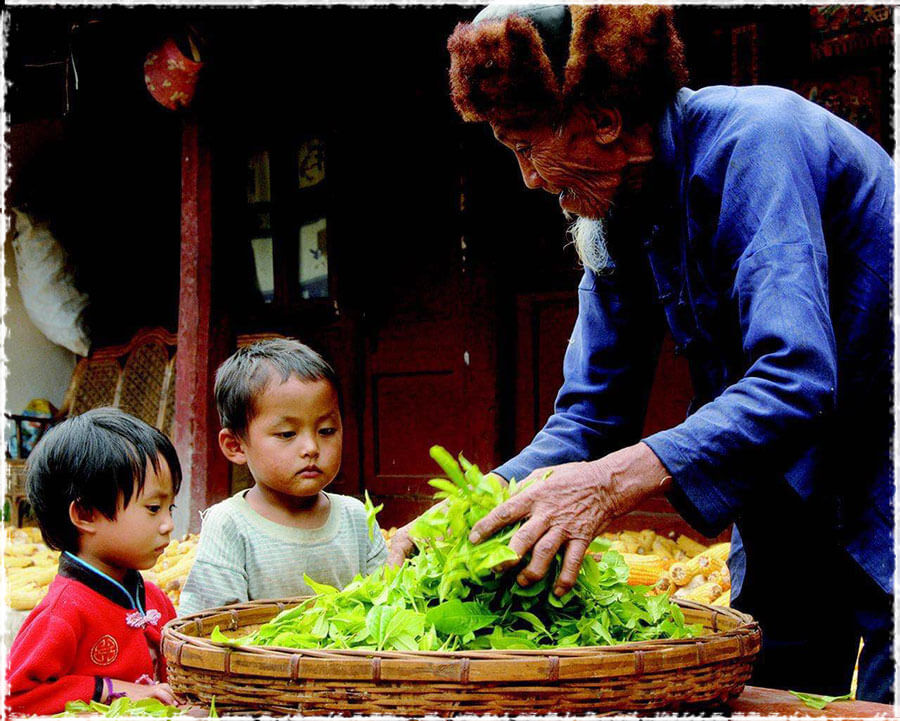 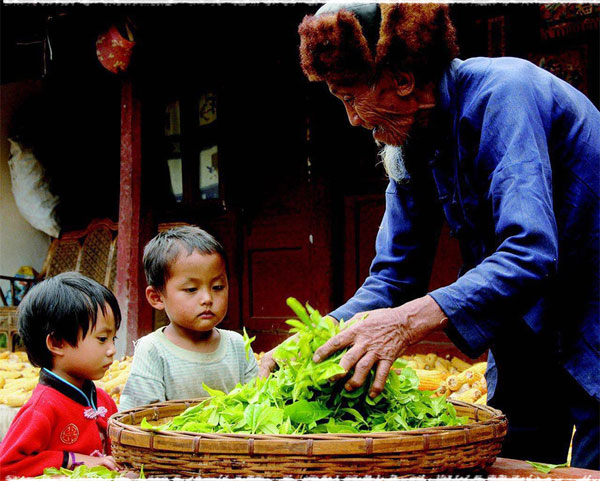 Comparison and contrast of the average temperature in two tea cities, Lincang and Baoshan

Is there any famous tea in the west of Yunnan?

Located in the south of Dianxi Longitudinal valley, Fengqing is famous as the hometown of Yunnan black tea in Lincang and is one of the original places of tea in the world. In Fengqing lies a succession of mountains, which alternate with rivers. Fengqing has a long history of planting, producing and drinking tea. The Superfine Yunnan Dian Hong Black Tea was successfully produced in Fengqing in 1958, which then has a national reputation. 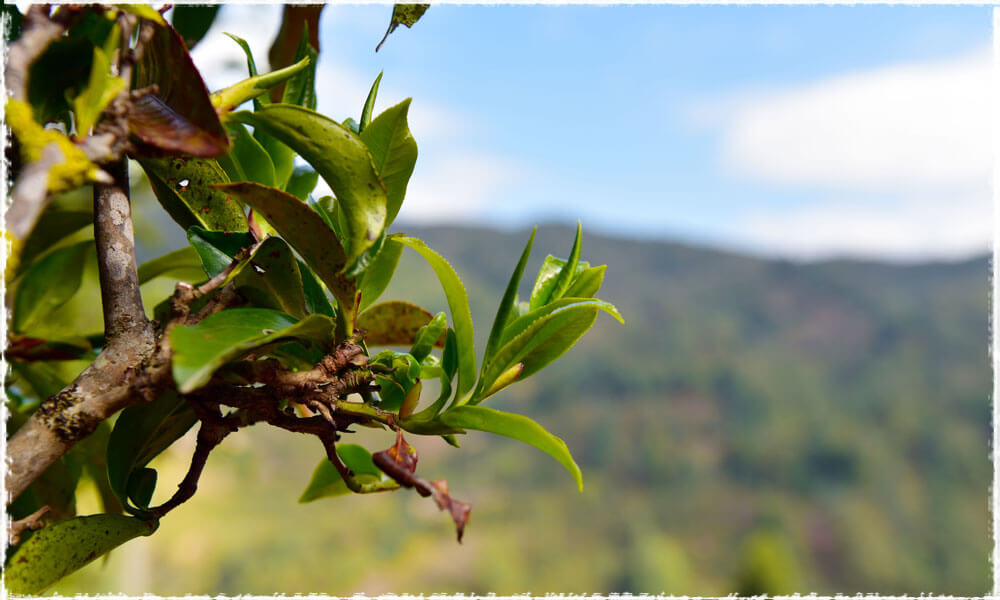 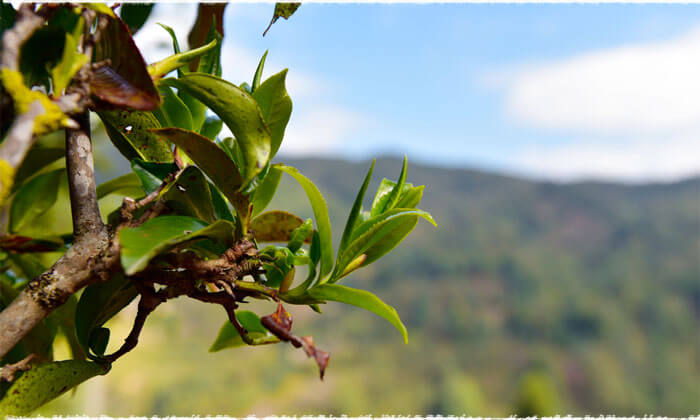 The South of Dian tea-producing area

Encompassed by Jinsha River, Lancang River, and Yuan River, most areas in the South of Dian are sloping gently in terrain and agreeable in climate. Owe to the excellent growing environment, tea is rich in mineral substance, gentle and fresh in taste, without any irrigative feeling. There are large groups of old tea trees in the east, among which six major tea mountains (Youle, Gedeng, Yibang, Mangzhi, Manzhuan, Mansa) are the most outstanding. 667 hectares of tea garden in Pu’er are rather striking.

Most areas in the middle and lower reaches of Lancang River are sloping gently in terrain and low in latitude. The climate is heavily influenced by tropical and subtropical season wind so that sunshine is ample, rainfall is abundant and relative humidity is above 85 percent. The moist mild environment is very appropriate for the growth of tea trees. Moreover, most areas have first class tea-growing soil, where the contents of organic matters are more than 3 percent.

Located in the southwest of Yunnan, Xishuangbanna is one of the Cradle lands of Chinese tea and one of the significant producing places of Yunnan Pu’er tea. Here lies noted six major Pu’er tea mountains.

Located in the north tropic and the south sub-tropic, the major tea mountains have more than 1200 millimeter rainfall every year, with an average annual temperature of around 18 centigrade. The thick vegetation and excellent climate that winter is warm and summer is cool provide the fantastic environment for tea growth and lay foundation for the good quality of Pu’er tea.

As a kind of cooked tea (fresh tea), Pu’er tea must go through man-made pile fermentation (and proper preservation). It uses Yunnan large-leaved tea as material, which should be deactivated, rolled and dried. Pu’er tea has various shapes and various ways to drink. The longer time it is preserved, the more fragrant it would be. Collecting and appreciating Pu’er tea is quite good for health, especially for weight lose of pu-erh tea.

Additionally, in the same place as Xishuangbanna, Menghai not only can produce Pu’er tea, but also can produce such green teas as Yunhai Pekoe and Nannuo Pekoe.

Menghai lies in the tropic. The subtropical monsoon climate leads to a little difference in temperature and many foggy days. The producing place of Yunhai Pekoe is always wreathed in mist all yeas around, so there are lots of pekoes in the leaves. Hence, it got its name. With soft and smooth color, Yunhai Pekoe has tight curled cord and sharp needle. After brewed, the beverage looks clear and tastes mellow. Tea leaf looks fresh and tender. 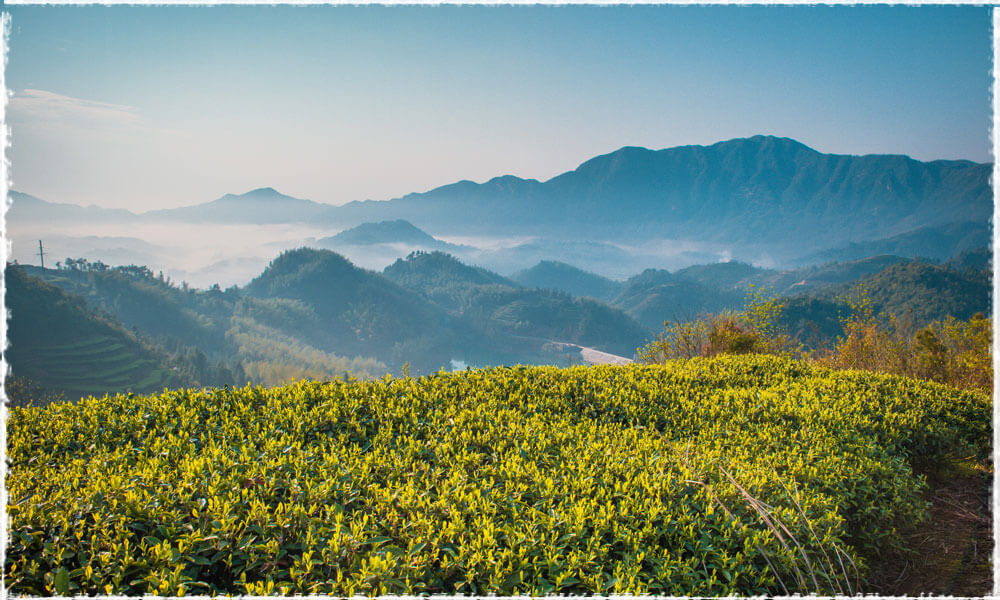 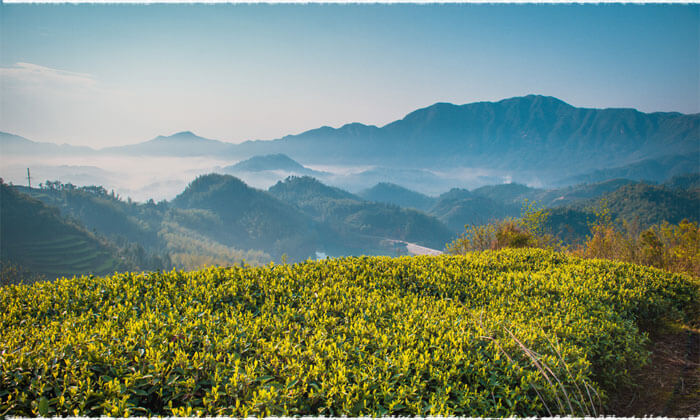 The center of Dian tea-producing area

Although there is a little difference in temperature compared with Lincang and Baoshan, geographic location determines that tea trees planted here are not good as those in Lincang. Nevertheless, the green tea of some note makes here become more and more diverse.

Originally produced in Mouding, Chuxiong, Huafo Tea is a new kind of famous tea. Mouding is in the center of Chuxiong, named after Huafo Mountain. Huafo tea leave is made from Menghai large-leaved tea in Lincang. With Blackish green and sleek color, it is tight in shape and has sharp needle. After brewed, the beverage looks dark green and has long-lasting fragrance. 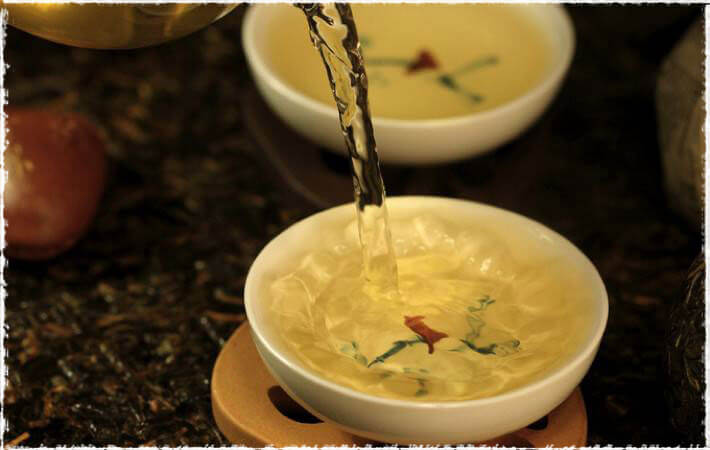 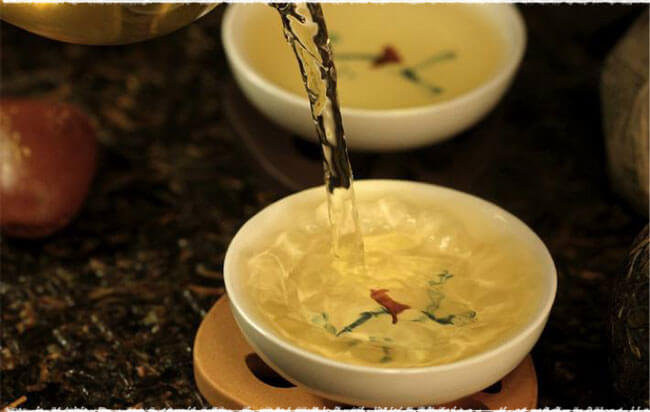 The northeast and northwest of Dian tea-producing area
This tea-producing area is disperse and rare. Especially, the old tea garden is far from the road and the transportation is very inconvenient. Sunshine is abundant by day and the compound material by photosynthesis is quite much, while the temperature is low at night and Photosynthetic rate is reduced. Therefore, nutrients can be reserved well. Big temperature difference between day and night improves the output of tea leaves, so the yield of Taidi tea tree here is no less than that of wild tea tree in other places. 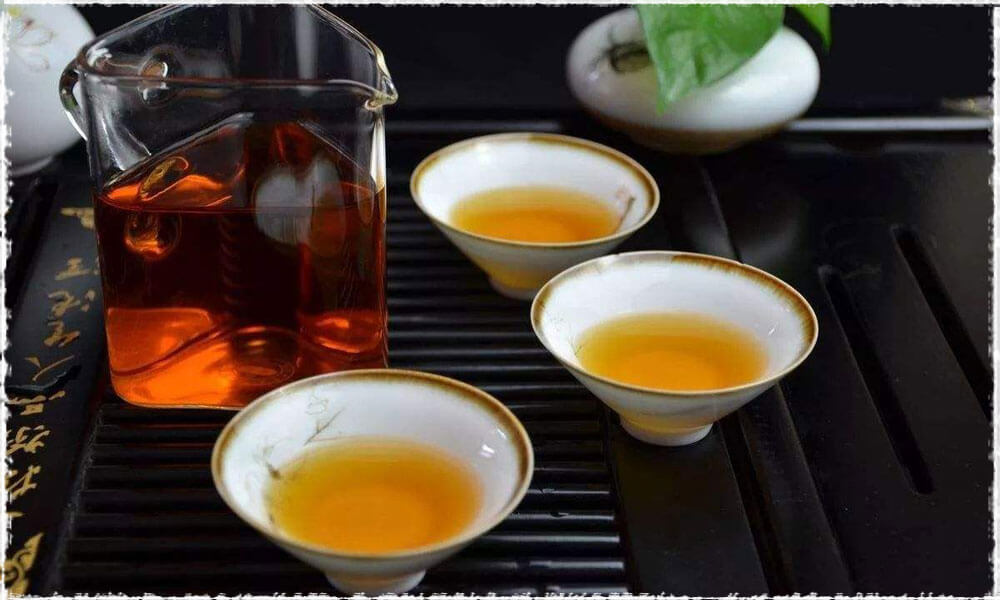 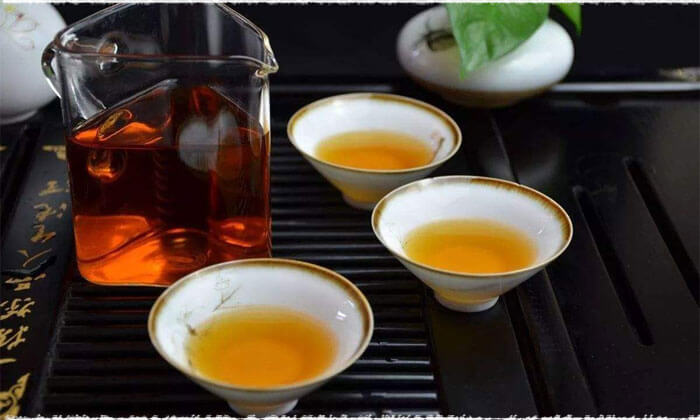 Shangri-La, Diqing, the closest place to the heaven

Diqing is a special place, where a Pure Land, Shangri-La has perfectly preserved natural ecology and traditional culture inheritance. In Tibetan, “Diqing” means a propitious pleasant place and the closest place to the heaven. “Shangri-La” is used to describe a piece of peaceful and tranquil land in the novel Lost Horizon, written by English novelist James Hilton in 1933.
Shangri-La symbolizes a sort of peaceful, tranquil, free and happy life. All kinds of cultures co-exist in harmony and blend with each other, which attract the adventurers and explorers all over the world. 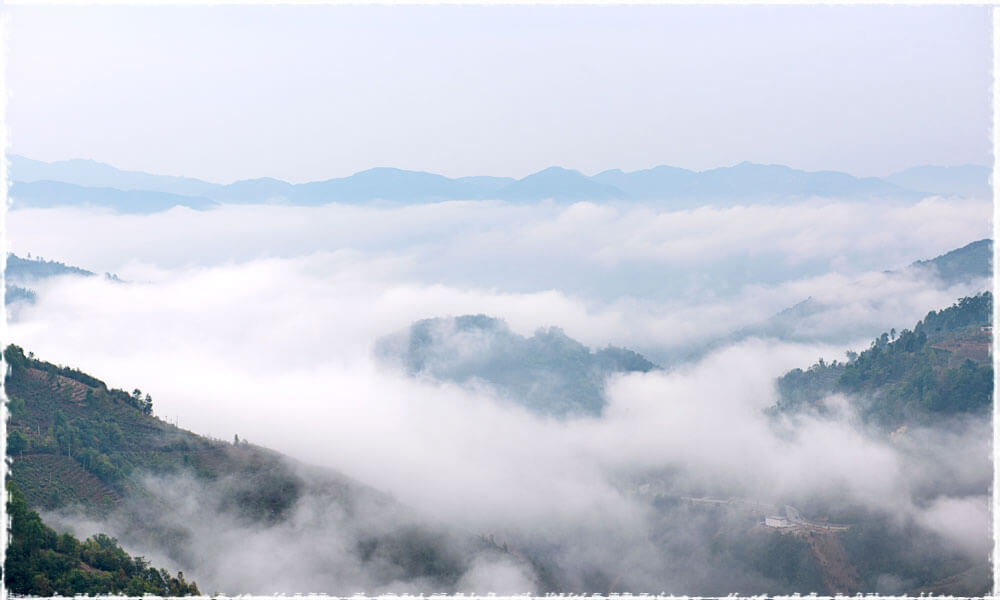 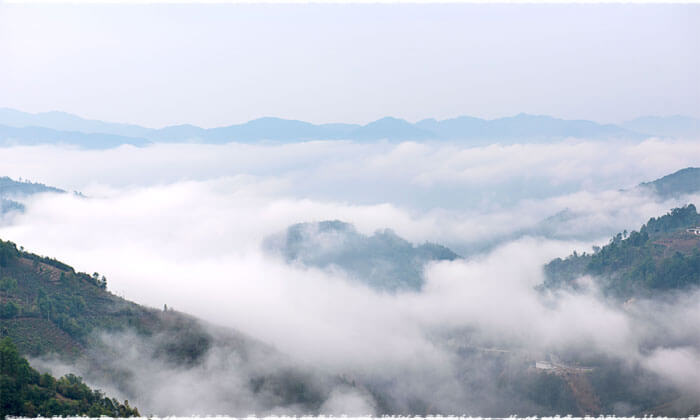 James Hilton brought an image of “Paradise on Earth” into western cultural values. As comment on Lost Horizon in the British Writer Dictionary says, it made a great contribution that Shangri-La, a word referring to a fictitious land of peace, is created. Since then, this imaginary land of happiness has become the pronoun of “the Garden of Eden”, “a fictitious land of peace” and “Utopia”.