A classic high-grade Tie Guan Yin Tea with strong Yinyun (Unique character for high-grade Tieguanyin). The orchid fragrance, which lingers for a long time in the mouth and throat, is especially apparent when breathing.

When Anxi County is mentioned, the most common association is Anxi Tie Guan Yin, “Iron Goddess” tea. It is well-known both at home and abroad as one of China’s ten greatest teas. As tieguanyin can endure through a great number of infusions, all the while letting out a lofty, floral aroma, this tea is truly unique to drink. The aroma washes away the noise and stress of the city and leaves in its place the brisk fragrance of orchids, a mellow taste from the first sip to the last, and then the tea’s characteristic sweet, throaty flavor and lingering aftertaste.

The Nanqi Tea Garden, situated at an elevation of between 800 and 1000 meters, is located in Houtian Village of Longjuan Township in Anxi, China. The climate here is warm and moist throughout the year with an average temperature between 16 and 19℃ and an annual rainfall of around 1800mm. Nanqi is a superstar tieguanyin growing region, with the tea planted here of excellent quality due to the ecologically unique natural environment.

Perhaps more significantly, the local people are hard workers who know very well how to make tea. Their traditional methods of processing give Nanqi tieguanyin its unique Guan Yin taste, aroma, and feel: sun-withering, spreading, fixation, rolling, forming, and roasting. The orchid aroma of Nanqi tieguanyin is starting to become known throughout the world. 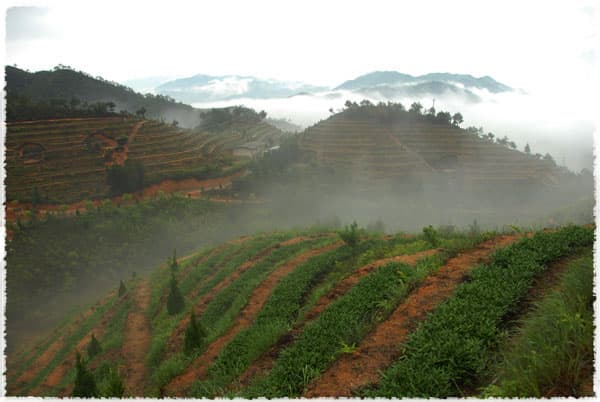 After tasting this hand-crafted tieguanyin, Angel Chen from TeaVivre interviewed the farmer, Ms. Chen Biyi, about the tea.

Angel: Where are the leaves for this tea from?

Ms Chen: Nearly every town in Anxi provides fresh tea leaves. The materials for this tea come from plantations mainly in the areas of Longjuan, Xianghua, Gande, Huqiu, and Xiping.

Angel: Usually when drinking tieguanyin, we may feel a slightly sour taste at the back of our tongue, along with the natural aroma of tieguanyin. Where do these qualities come from?

Ms Chen: This is due to a longer period of spontaneous fermentation before fixation. The sour flavor comes out naturally after the extended period of tossing and oxidation, often lasting for three days.

TeaVivre: A sour flavor might not show that tea has gone bad, or that it is of bad quality: sometimes the sourness is due to something called tuo suan (拖酸), or ‘drawing out the sourness’. Tea leaves are not pan-fired immediately after being picked; they may be put aside for two to three days, during which the leaves may oxidize and spontaneous ferment, which is what develops that sour flavor. This is part of the production method in preparation for ‘stir fixation’.

Angel:I didn’t taste a flavor like that when drinking this nonpareil tieguanyin. Is that a result of the instant stir fixation?

Ms Chen: You’re right. We call this kind of tieguanyin Zheng Chao - ‘zheng’ refers to the middle of the day while ‘chao’ refers to the process of stir fixation, ‘chao qing’, or frying the leaves to end the oxidation process and thus “fix” the current level of oxidation.

TeaVivre: Zheng Chao tieguanyin has a smooth liquid with a clear, heavy flavor, and a strong sweet orchid aroma. The local Fujian people name this characteristic of tieguanyin as “The Charm of Tieguanyin”, or Guan Yin or Yin Yun. It is a standard of discerning the quality of an Iron Goddess. Tea workers will decide whether the tea leaves are ready for stir fixation by their years of experience, and in this way, the flavor of one tieguanyin may vary due to the different experience of the tea makers.

Anxi is in the southeast part of Fujian, with a total area of around 3000 square kilometers. The environment here is definitely suitable for growing tea trees, with an average temperature between 16 and 20℃ and an annual precipitation of 1600-1800mm. According to records in the Anxi County Annals, the tea production in this area began during the Tang Dynasty, then rose through the Ming and Qing Dynasties, and flourished in the last century - overall spanning a history of over a thousand years.

Anxi has been renowned as the capital of tea in Fujian, and in March 1995 was named the Home of Chinese Oolong by the Ministry of Agriculture.

Tie Guan Yin is the representative of Chinese oolong tea. Oolong teas were first developed in the early 1700s in Fujian as a cross between nonfermented white and green teas, and fully fermented black teas, with the best of both in a single tea. Oolong quickly became popular throughout eastern China and Taiwan, and in the early 1970s spread to Japan and the rest of the world. Fujian, the home of oolong tea, still produces the finest.