Old Tree pu-erh tea, also commonly called Lao Shu pu-erh, is made using tea leaves from Fengqing large-leaf tea trees between 300 and 800 years old. The ‘old tree’ in the name refers to the wild ancient trees left to grow in natural forests, semi-cultivated old trees in wild areas, or artificially-cultivated trees that have been maintained for at least a century.

Pu-erh tea made from old tree leaves is generally higher in quality than younger teas. Old tea trees are naturally grown in non-polluted environments, resulting in higher nutritional value of the leaves, and it also endures better through more infusions.

For making this tea, the leaves are pan-fried, rolled, dried, and then pressed into loose pu-erh (also known as Saiqing raw tea), after which they are steamed, shaped, and sun-dried again, which results in the end product of the cake.

Different from the new-made Pu-erh tea that has strong and bitter taste, the raw Pu-erh tea will be aged slowly with time. The taste will change and the bitterness will fade, and then it will add many new notes. After 6 years of aging, now the texture of this cake is steady and the bitterness has faded. The thickness is enhanced, and the tea is full and soft when the entrance. Besides, it can be brewed for many steeps and the tea tastes sweeter at the last steeps. This sweetness is similar to crystal sugar and with long lasting in palate.

This cake comes from one of the famous wild old tree reserves in Xintang village, Lushi Town, Fenqing. After the trees were planted, the ancient farmers only clipped and harvested them sparsely, and used no fertilizers or pesticides; since then the trees have been left to grow freely.

This pu-erh tea is made from the Fengqing large-leaf subspecies of the Yunnan large-leaf. It propagates sexually and takes the form of an arbour tree, meaning that it can grow to over six meters tall. 1984, the Fengqing large-leaf species was certified by the Chinese government as a national grade. It contains an abundance of tea polyphenols (30.2%) and catechins (13.4%), as well as 2.9% amino acids and 3.2% caffeine.
The leaves used to make this cake in particular were carefully selected from 300-500 year old large-leaf tea trees, grown naturally and organically without any artificial fertilizer or pesticide usage, and using only manual farming and caretaking techniques. 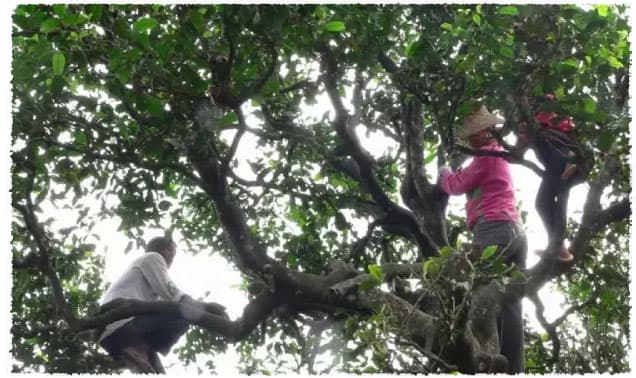