Inspired by the guardrail of Chinese old well, the teapot is used the rare Jiangpo Ni as the raw material, and painted with vivid character image and delicate calligraphy, which is most Zisha lovers’ best choice for collection.

The shape of the Jing Lan style of teapot comes from the guardrails of old Chinese wells, both protecting the well from collapsing as well as keeping people from falling into it; in ancient Chinese poetry, it often symbolized ‘homeland’..
This pot is made of rare Jiangpo Ni clay from Huanglong Mountain, and is engraved with exquisite images and words of landscapes. It is a steady, solid pot with a flat bottom, lid, and overall appearance, somewhat square in shape; the handle’s height is close to that of the body, granting a stronger sense of stability when pouring. The spout is short and straight, with the liquid flowing smoothly and quickly. The mouth of the pot underneath the lid is large, suitable for bigger tea leaves and allowing for convenient cleaning; the lid connects tightly as well, guaranteeing an airtight seal, and the button on top looks almost like a small bridge. 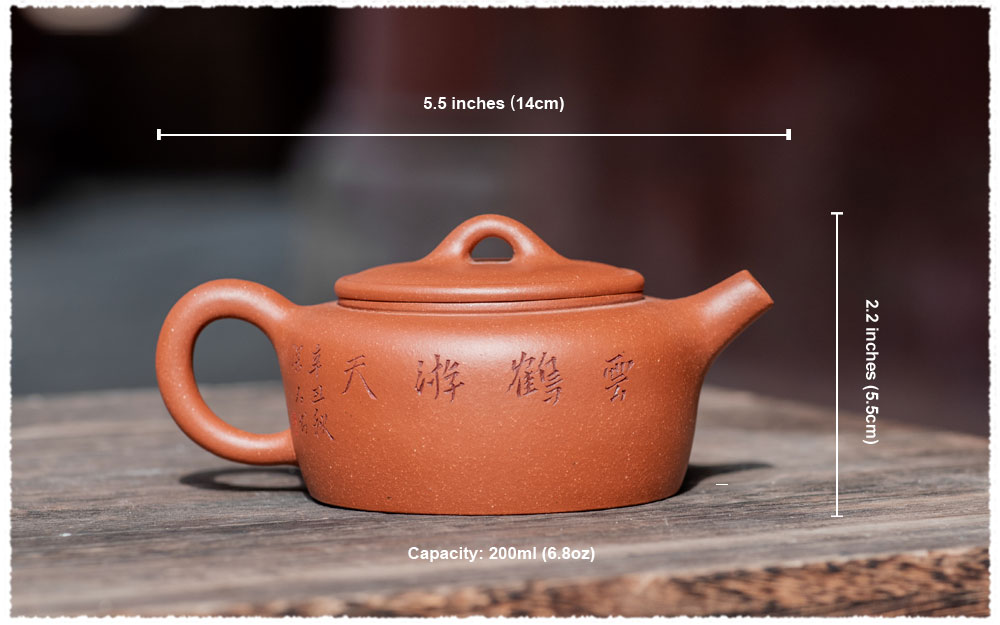 Jiang Po Ni: This clay was originally found in the early 90s when the Yixing government opened the so-called “pottery capital road” running from Dingshan to Yixing, passing through the junction slope of Huanglong and Qinglong Mountains. To smooth the slope, the workers began cutting and digging it away, which resulted in the discovery of the raw Zisha ore. It is also called Gangpo Ni by some local people.
It was discovered by accident, and as such, its stock is scarce. It is light-brown in color which turns a lovely red speckled with yellow once fired, a fresh tone with a granular texture that becomes a bit oily and waxy afterwards, all in all an excellent variety of Zisha clay.