This Oolong tea is scented with natural extractive from strawberry. Enjoy both fresh taste of oolong tea and sweet strawberry taste.

To make this tea, natural strawberry extractives are added following the preparation of the oolong leaves, in order to retain the original flavor as well as ensure that both this and the strawberry fragrance can be tasted. The leaves themselves are picked and produced under traditional methods.

As soon as you open the bag you can smell the sweet strawberry fragrance, which comes out even more strongly during brewing.

Fujing Tea Garden sits at an elevation between 500 and 800 meters in Huqiu, one of the main tieguanyin production areas in Anxi. The weather here is warm and moist year-round, with an average temperature between 16 and 19℃ and an annual rainfall of about 1800mm.

Mr. Lin Xingbiao has been a professional tea farmer for over forty years. Born to a traditional tea family, he has been deeply ingrained in the culture since childhood, and ended up building his own tea factory. As his factory gradually grows, he continually attempts to seek a common development between the tea enterprise and the tea farmers themselves.

Anxi lies in the southeast of Fujian and covers a total area of about 3000 square kilometers. The environment here is perfect for growing tea trees, with an average temperature of 16 to 20℃and precipitation between 1600 and 1800mm. 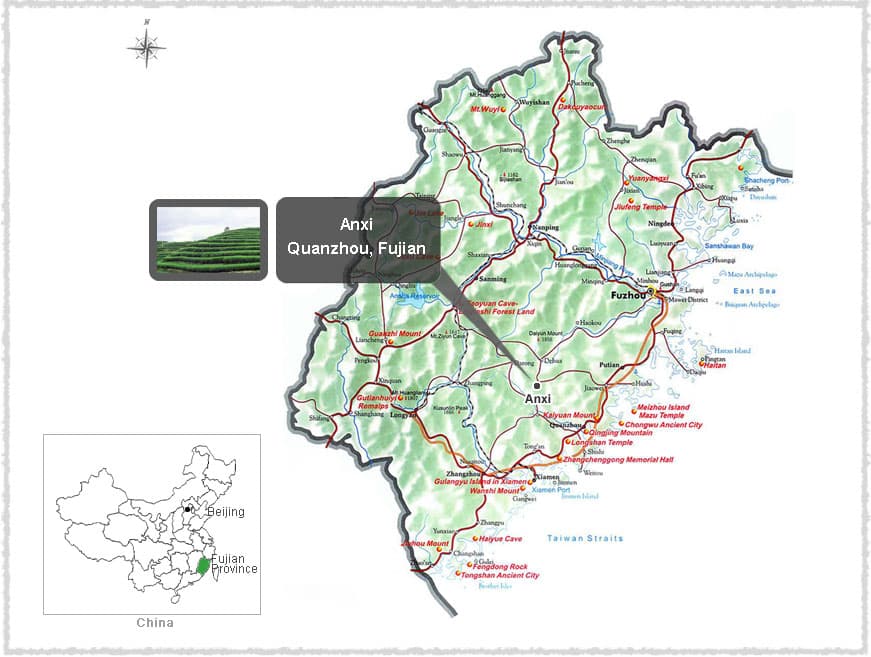 According to records in the Anxi County Annuals, tea production here began during the Tang Dynasty, expanded throughout the Ming and Qing Dynasties, and flourished in the last century, resulting in a history of over one thousand years. Anxi is renowned as the capital of tea in Fujian, and in 1995 was named the Home of Chinese Oolong Tea by the Ministry of Agriculture.

The History of Oolong Tea

Oolong tea was first developed in the early 1700s in Fujian, China. As a cross between non-fermented green teas and fully-fermented black teas, it combines the best of both in a single tea - and as a result quickly became popular all throughout eastern China and Taiwan. Nowadays, Anxi is the largest producing area of oolong tea, with its representative type of tia guan yin oolong tea.

In the year 1855, a man named Linfengchi took a few oolong tea trees with him from the Wuyi Mountains in China and traveled to Dong Ding, in Lugu, Taiwan. Once there he replanted the tea trees, beginning the history of Dong Ding Oolong, one of Taiwan’s most famous teas. During 1858, a British company at that time called Jardine Matheson & Co. brought semi-finished oolong tea from Taiwan and spread it around the world.