This Ya Shi Xiang Phoenix Dan Cong Oolong is popular for its high floral fragrance, and sweet, mellow taste. Tea lovers who prefer high-fragrant tea can have a try.

TeaVivre’s Ya Shi Xiang duck shit aroma dan cong oolong tea is a type of light oolong: after the first round of baking and second round of drying, the fragrance of the dry leaves of this tea becomes more prominent and long-lasting. Some tea lovers may compare this tea to tieguanyin, since both types are remarkably fragrant; however, when compared with the “guan yin yun” of tieguanyin, dan cong has a special kind of “shan yun”, giving it a fuller, richer taste and a better balance between its aroma and its flavor, resulting in an intoxication scent and sweet liquid.

When brewing this tea we use a Zhu Ni zi sha teapot in order to really energize the aroma and bring out its full taste. With 7g of leaves and boiling water, we rinse the tea once and then start our real steepings, with a fresh, sweet gardenia aroma in the first steep, and a fuller floral taste in the second and then the third becoming more mellow with a long-lasting aftertaste. As well as retaining its heavy fragrance, dan cong tea is resilient through many steeps; in our experience, it retains its floral aroma even after eight or more.

Pingkengtou Village, located in the northwest area of Fenghuang Town, is the origin of Ya Shi Xiang Phoenix Dan Cong Oolong Tea, also known as the first village of "Ya Shi Xiang ". According to local tea farmers, the mother tree of Ya Shi Xiang is about seventy or eighty years old, branches standing upright with 2.38 meters in height. With about 900 meters altitude, it is surrounded by the fog and rain all around year, and the natural geographical environment is moist and superior. The soil here belongs to yellow soil, which is very suitable for the growth of the tea bushes.

Landscape of the tea mountain
Photograph by TeaVivre Member Chris 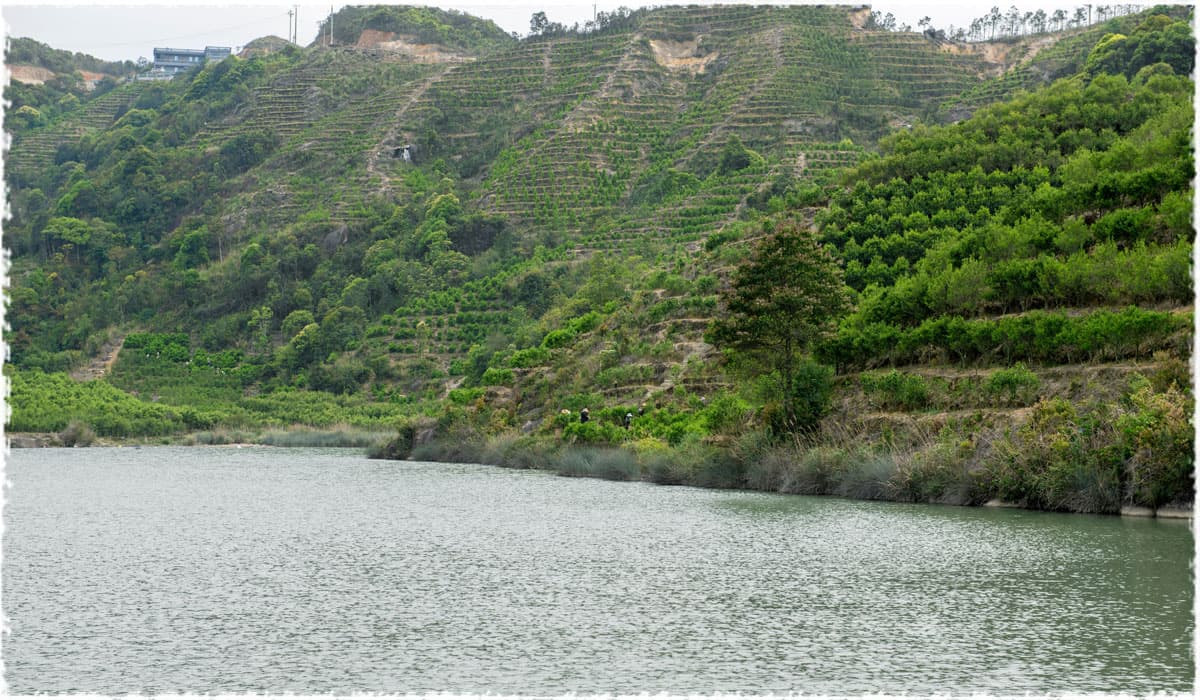 The tea trees at this garden are all more than 40 years old, allowed to grow naturally without any kind of artificial maintenance or pruning. Because of the excellent geographical conditions here, the branches of the trees are blanketed in moss, which is a unique feature of high-mountain and ancient tea trees. 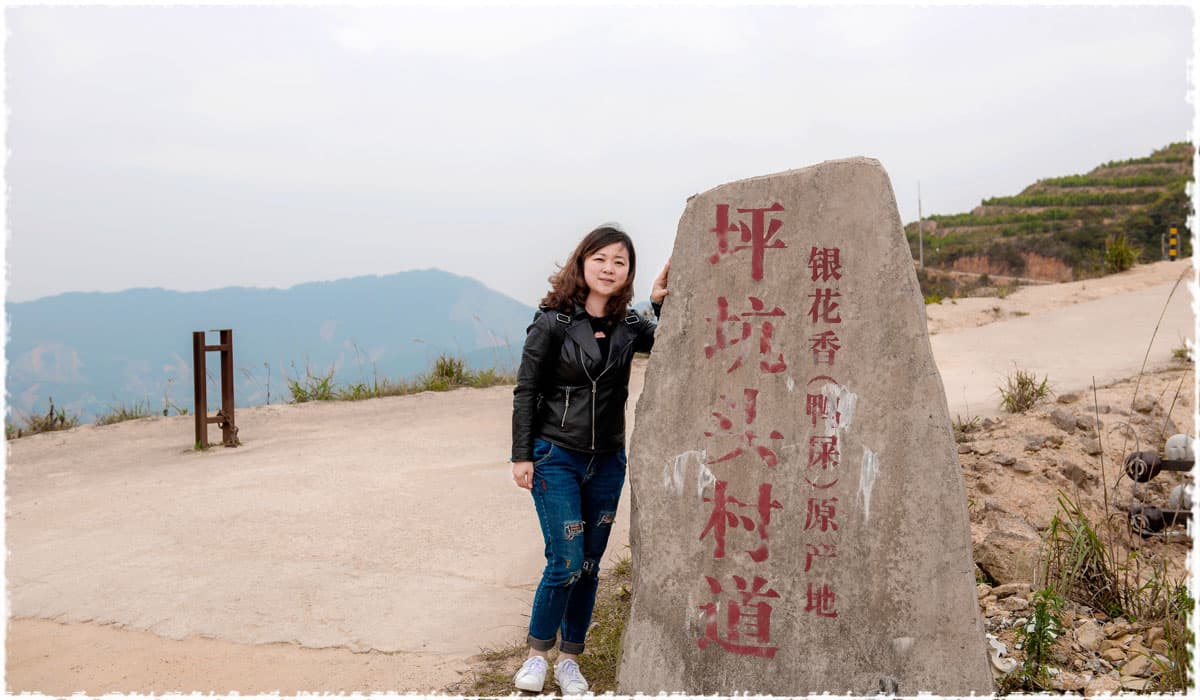 The path in Pingkengtou Village, the origin of Yin Hua Xiang (Ya Shi)
Photograph by TeaVivre Member Chris

The Chaozhou Phoenix Mountain is known for its tea, among the 73 Phoenix Mountains. It has beautiful scenery, fresh air, and a humid and mild climate, with an annual average temperature of about 20℃ and average annual precipitation of around 2100 mm. This mountain is not only a tourist destination, but also the main production region of China’s well-known Phoenix Dan Cong oolong tea, which draws its unique fragrance and taste from the area’s climate and soil. In 1982, Dan Cong was recognized as one of the 32 most famous teas in China. Phoenix Mountain has a total of over 20,000 acres devoted to tea gardens, among which is an ancient tea forest of over 3,000 trees all between 200 and 400 years of age, with some “Song Zhong Tea King” trees as old as 600 years.

It is thanks to Mr. Li that we can offer you this Ya Shi Xiang duck shit aroma Dan Cong oolong tea. Mr. Li comes from Chaozhou, Guangdong, and met Angel at a tea expo where he heard that she was searching for good, quality teas, and recommended this Ya Shi Xiang Dan Cong oolong to her. Angel found that it is different from the Guang Dong Phoenix dan cong also offered on our site: even if the aroma is strong and powerful, it will not block out the flavor of the tea itself. Instead, the aroma and flavor work together and bring out the best in each other, which stood out to Angel.

This Ya Shi Xiang “duck shit aroma” dan cong oolong tea is made with leaves from the Wuye Dan Cong tea tree, called such - wu ye - for its dark green leaves. The spring tea of this tree with one bud and two leaves contains 49.7% water extractives, 4.4% amino acids, 17.8% tea polyphenols, and 3.4% caffeine. It holds a rich gardenia fragrance and notable honey-sweetness, which means it is suitable for making high-grade oolong and black teas. 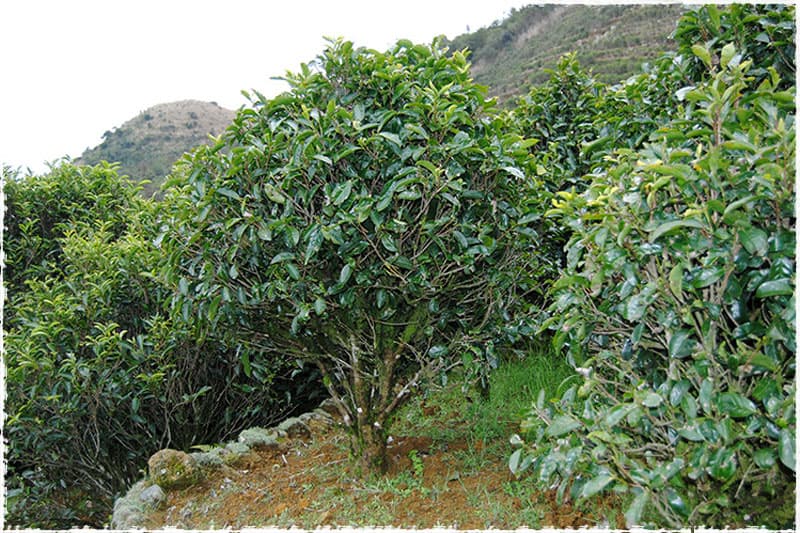 There is a story about the origin of the name of this tea, duck shit aroma. The original tree of this tea was found in Wu Dong Mountain, growing in yellow soil; the leaves of the tree are dark green in color, and the shape is very similar to those of the Schefflera octophylla - the Australian octopus tree. Along with these traits, tea made from this tree had a noticeably rich aroma and taste, which led people to be curious about kind of tea tree it was. The owner of this particular tree was worried that someone would steal his tree, so he falsely claimed that it was called “duck shit aroma”, in order to dissuade interest - but as it turned out, the vulgar name did nothing to prevent interest in it, and soon more of these trees started spreading. As a result, this tree has been grown all over Phoenix Mountain, and its popularity continued to grow.

In 2014, experts from the Fenghuang Tea Association decided that the tea’s scent is more similar to the fragrance of wild honeysuckle, and as such they chose to change its name to “Yin Hua Xiang”, or “honeysuckle aroma”... but it is still known as Ya Shi Xiang, duck shit aroma, because so many tea lovers prefer this name more.