There is an old saying in China: "like the water in Yangtze River, the tea from Mt. Mengding is of the high quality." This tea is handmade by Mr Bai, the handmade tea master.

There is a tea in Mt. Mengding located in Ya'an, Sichuan. It is named Meng Ding Gan Lu because of its sweet and silky flavor. It is an ancient famous tea in China. Well-selected the fresh and tender tea buds in the early spring, and being made after the making process of “three-time fried, three-time rolling” and so on. The finished tea is aromatic, the leaves are tender, and the liquid is yellowish-green without color-changing even after a long time brewing. The taste of Meng Ding Gan Lu is sweet and refreshing, it is richer and mellower compared with other green teas. Smell carefully, you’ll notice a delighted candy sweet lingering in our cups or tea pitcher.

About picking standards and making process

The raw material of TeaVivre’s Meng Ding Gan Lu is all about 1.2cm tea buds. Careful friends may notice that the wet leaves does not all look like a single bud, and the reason is to start with the making process of this tea. From the previous part we mentioned an important process “three-time fried, three-time rolling”, which means to pan fried the tea leaves for three time and rolling for three times. Generally, after removing part of the moisture content after the first time Sha Qing, the first time rolling will be carried out to make the leaves have a preliminary curling shape; Then will be the second frying and rolling, the tea leaves will be more curly and some white pekoe will appear during this period; The purpose of the next third time frying and rolling is to continue to reduce the moisture content in the leaves and form the final tightly curled shape, fine and well-proportioned and full of pekoe. During these process, some of the originally plump tea buds will be peeled off due to the external force of rolling and become clusters like flowers. That’s why the wet leaves are not only single buds but mostly the flower-like tea buds.

To summarize, the manufacture of Meng Ding Gan Lu not only takes a long time, but it also necessitates highly precise temperature and strength control during each process. An excellent cup of tea requires decades of tea-making skills.

TeaVivre’s Meng Ding Gan Lu Green Tea comes from the Mt. Mengding Tea Area at the average elevation of about 800 meters, which is located in Ya 'an, known as “the Rain City”. The ecological environment here is excellent, especially the misty and rainy climate provide advantageous conditions for the growth of tea, which help the formation of nitrogen in teas and increase the content of amino acids and other substances. 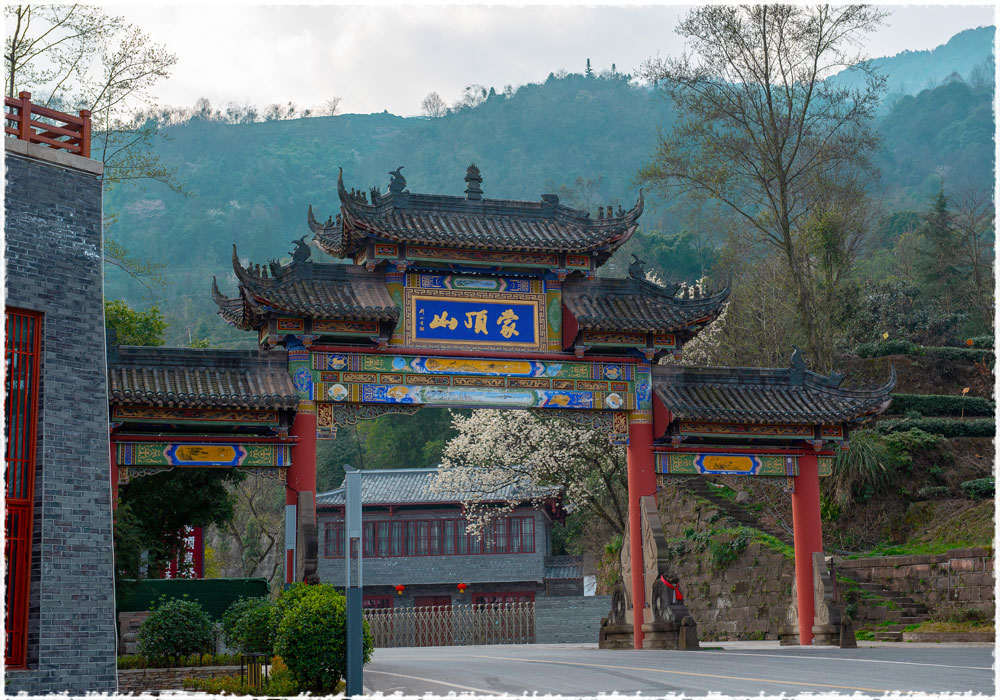 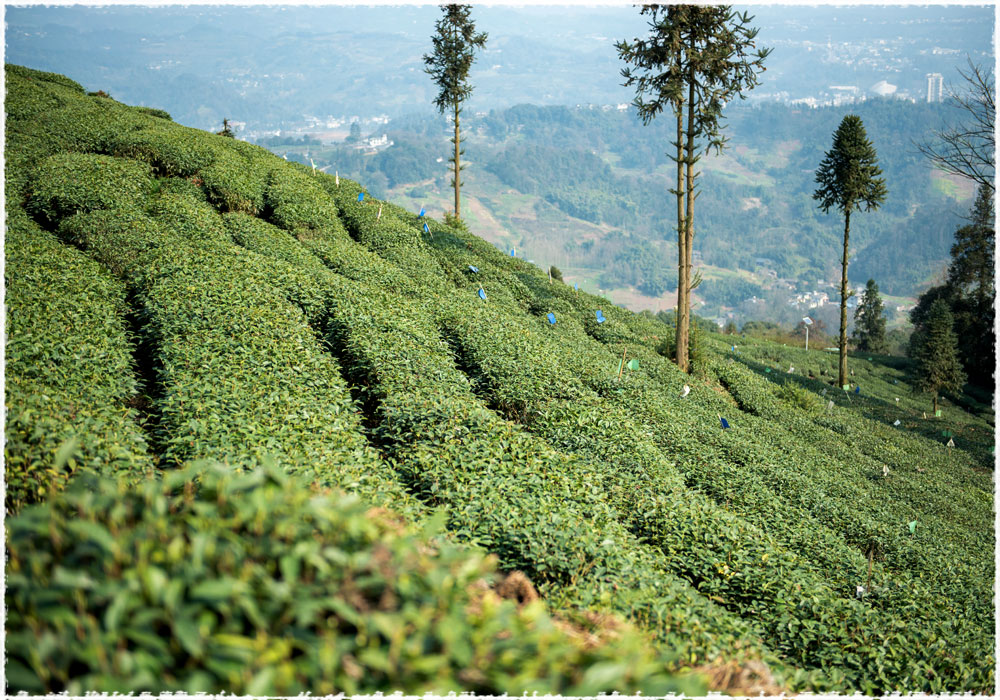 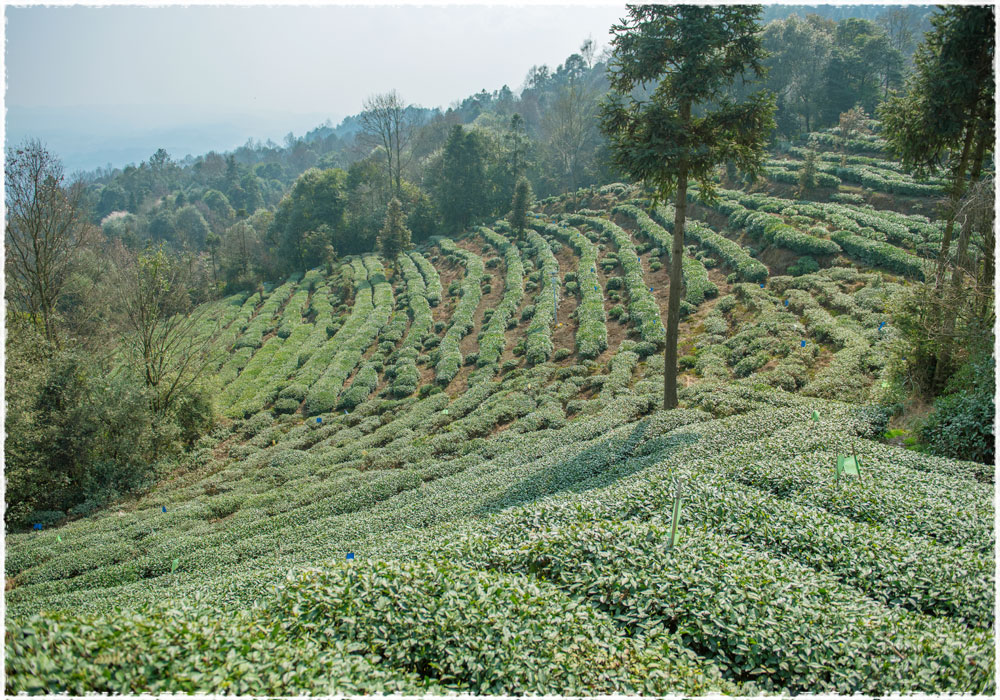 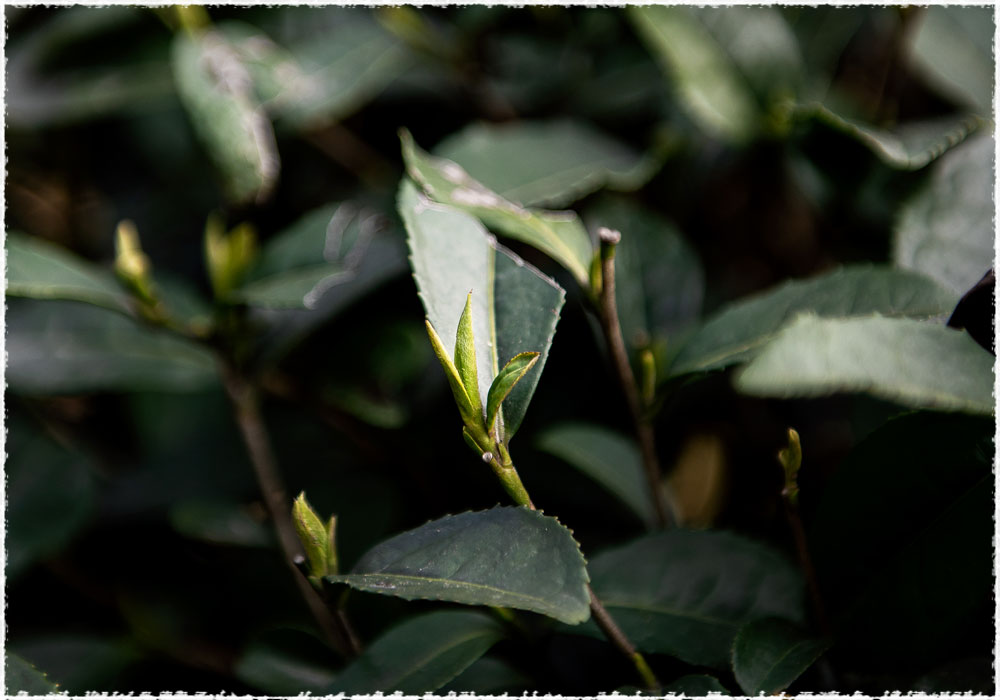 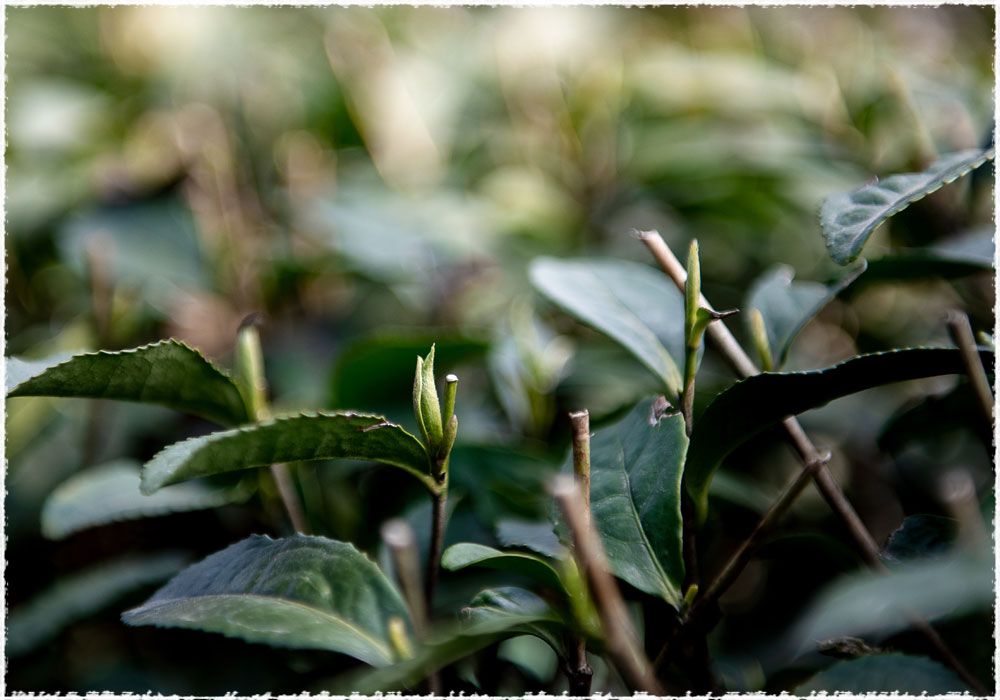 Views of the tea mountain. It is sparsely populated, quiet and beautiful, which belongs to the national protected natural scenic area. 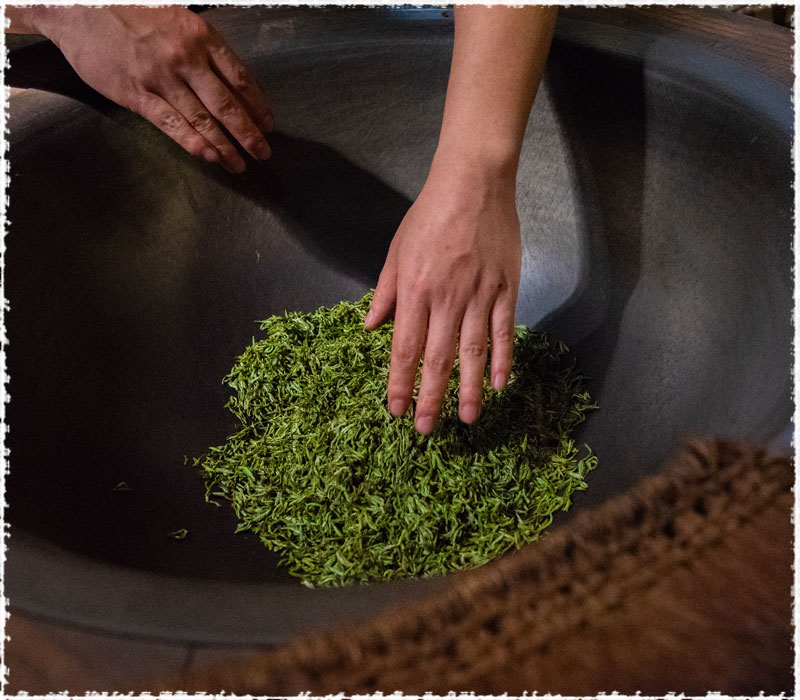 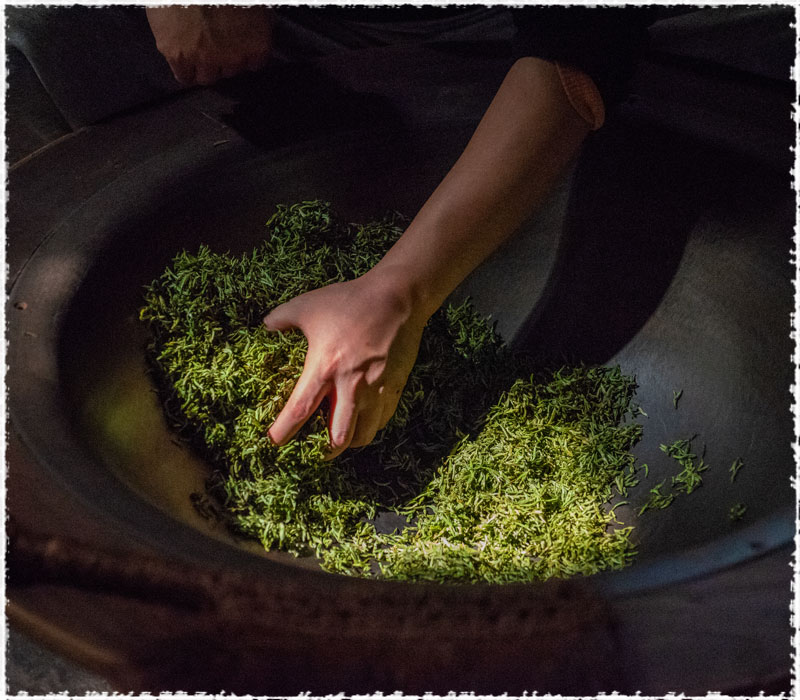 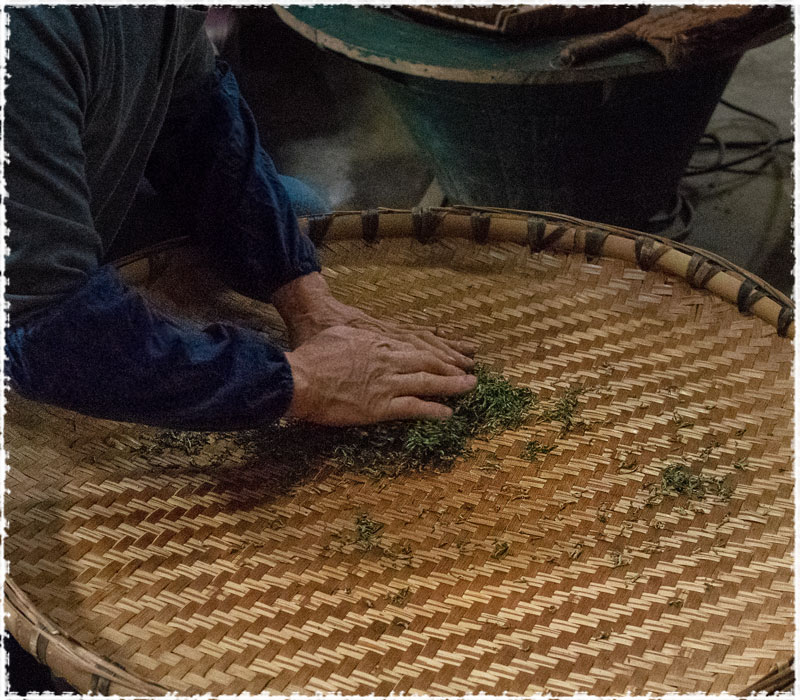 Hand frying and rolling of the tea leaves.

Mr. Bai Yuehui was born at the foot of Mt. Mengding, Mingshan District, Ya'an, Sichuan. He is a traditional craftsman of Ya'an Yellow Tea and has been engaged in tea making for more than 30 years. Almost every family here has their own tea trees, and the skills of growing, picking and making tea have been passed down from generation to generation. As a result of this, Mr. Bai began to learn how to manufacture Mengding tea and to contribute to the growth and promotion of the tea business in his hometown. What he excels at is producing Meng Ding Gan Lu and Meng Ding Huang Ya, which have been recognized by tea enthusiasts both at home and abroad. Mr. Bai is quite particular about the quality of raw materials. He said that only fresh leaves grown in excellent mountains, with good water, and in a good climate can produce pure tea. When visiting Mr. Bai's tea factory, we found that although it is not large in scale, the environment is quite clean and organized. He personally supervises every step of tea-making and works hard to guarantee that the tea in his hands tastes and is of high quality. We believe that such a determined, serious and enthusiastic master will be able to make more and better tea, and we are delighted to collaborate with him in spreading the deliciousness of this region to all corners of the globe. 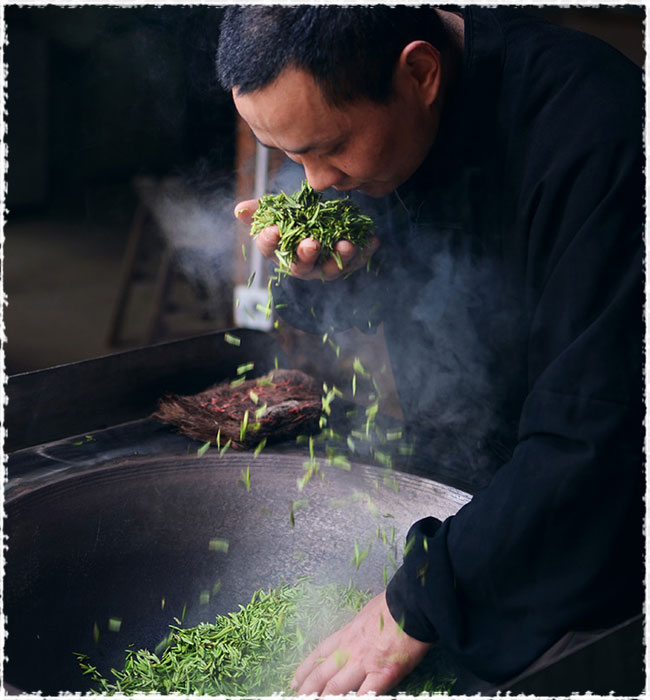 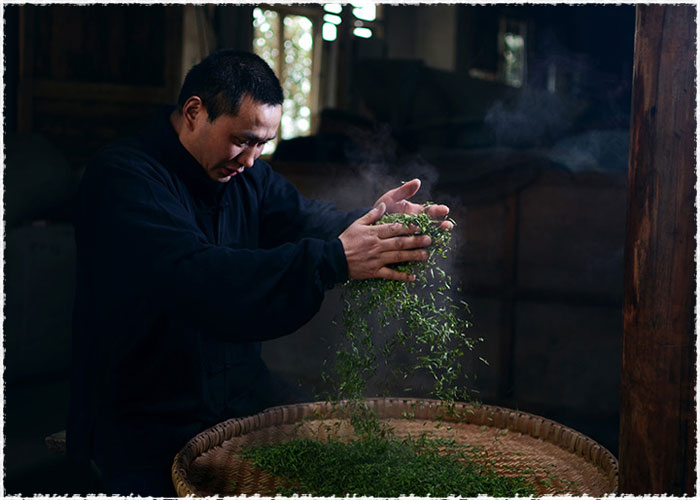 Ya’an City, located in the west of Sichuan Basin, is not only a city of mountains and rivers, but also a city with tea fragrance. People began to plant teas at Mt. Mending of Ya’an in the Western Han Dynasty, which not only has more than 2000 years of tea planting history and rich cultural heritage, but also has the reputation of “Like the water in Yangtze River, the Mengshan tea has the top quality”. The average temperature here is 14.5℃ and it's drizzly all year round. This special ecological environment can reduce direct sunlight, which is very beneficial to the growth of tea trees and the formation of nitrogenous substance in tea leaves. 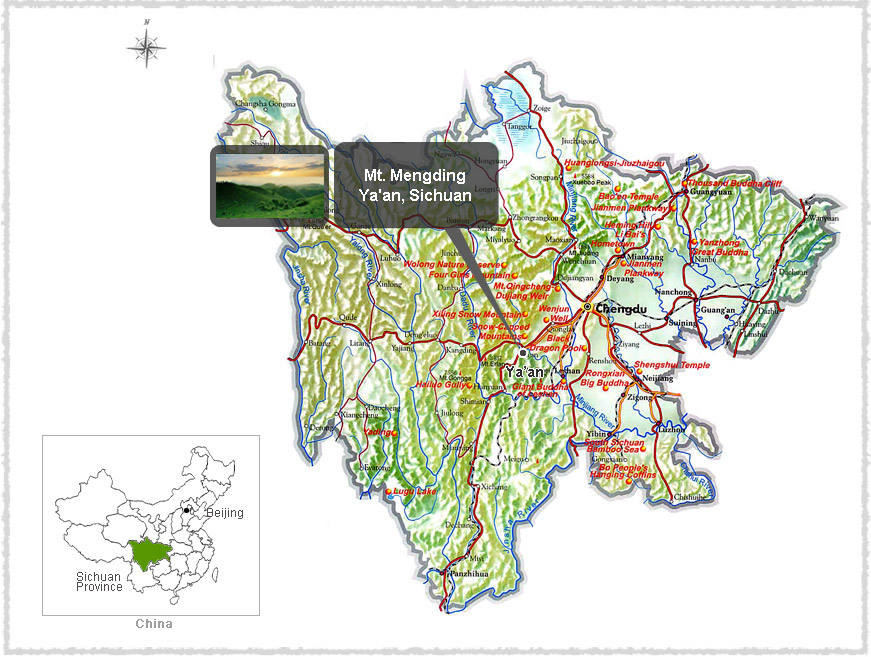 Fu Xuan No. 9, the preferred variety for making Sichuan tea. It belongs to small tree type, middle-leaf, and named after breeding from Fuding Dabaicha. Tea trees growing in Sichuan are usually picked at the beginning of March. The buds and leaves are green and neat, with strong tenderness and many hairs, which are suitable for making famous teas such as Maojian and Zhuyeqing. The composition contains 2.53% caffeine, 3% amino acids, 25.2% tea polyphenols, and 157.50 mg/g catechins. 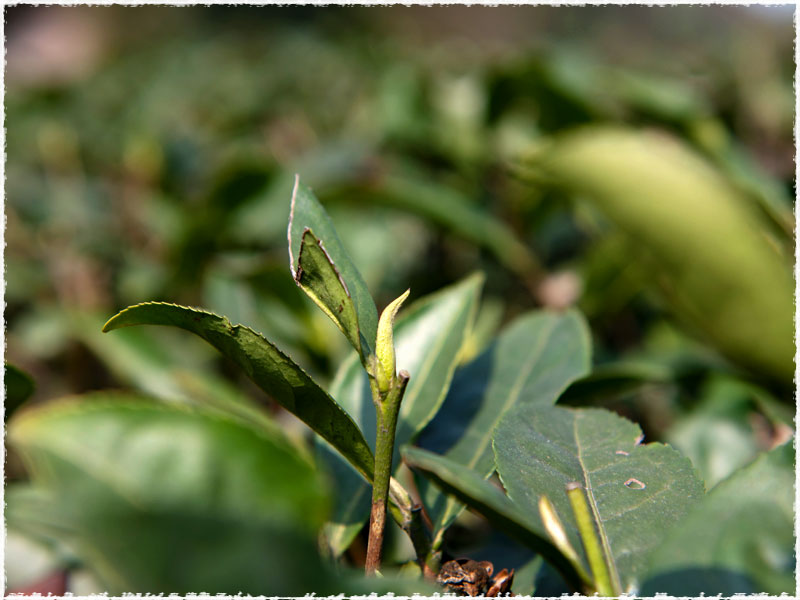 Meng Ding Gan Lu is a famous historical tea. According to legend, the cultivation of this tea began in the late Western Han Dynasty. Wu Lizhen personally planted seven tea trees on Shangqing Peak, which is now part of Mt. Mengding. It was known as fairy tea during the period, and it was also utilized as tribute tea, which lasted for a thousand years until the Qing Dynasty. After 1949, various famous teas in Mt. Mengding were restored and developed. In 1959, Meng Ding Gan Lu was rated as a national famous tea. And in 2001, Meng Ding Gan Lu was rated as one of the top ten famous teas in China by the Associated Press and the New York Daily.