Refreshing, sweet and fragrant, quite soft

Refreshing, sweet and fragrant, quite soft

I would like to use the word elegant to describe this Organic Tianmu Yunwu tea; both the fragrance and taste are quite soft. It is higher grade although the taste may softer than Tianmu Maofeng.

This tea is plucked during the early spring days near “Grain Rain”, or 谷雨, the sixth solar term. To ensure quality, one bud is picked with either one or two leaves, just beginning to open up; with this method, it is estimated that in 1kg of raw material, there are about 62,000 suitable young shoots.

Yun Wu translates literally to ‘cloud and mist’, and is somewhat of a generic name for green teas. In general, the higher the ranking of a green tea, the milder its taste will be - and like most of these high-grade green teas, Teavivre’s organic Tian Mu Yun Wu has a delightfully light taste. The flavor is very smooth, with some definite light sweetness as well as a brisk spring taste in each sip, soft yet long-lasting.

Surrounded by the Kwun Tong reservoir, the Baojia organic tea garden is located somewhere in the Tianmu Mountains in Lin’an, about 800-1000m above sea level. Many of our organic teas come from this garden; at this elevation, the superior geographic conditions allow for good drainage and moderate sunshine, two crucial factors for tea growth.

The average annual rainfall here is about 1550mm. The mountains are often covered by cloud and mist, blocking some amount of the direct sunlight on the tea plants and enhancing humidity and diffuse light. Along with this, the soil here is naturally high in organic content and has a slightly acidic pH level suitable for growing tea trees. As a result, the teas produced from this garden are especially tender and pleasant.

Ms. Liao has been in the organic tea industry for about ten years after going through the arduous process of founding an organic tea plantation entirely from scratch. Following several years of hard work and development, her garden is now fully established and has earned the USDA, EU, and JAS organic certifications ensuring the healthy quality of the tea produced there.

In August 2010, Dragonwell Long Jing tea from Ms. Liao’s tea garden won the first prize for the Hot Tea class in the tea championship at the World Tea Expo in Las Vegas, America.

This organic Tian Mu Yun Wu green tea comes from Tianmu Mountain in Lin’an, in the northwest of Zhejiang Province and at a distance of about 84km away from Hangzhou. The name ‘tianmu’ in Chinese means ‘the eyes of heaven’: there are pools atop each of the eastern and western peaks of Tianmu Mountain, looking like eyes watching the sky.
With an elevation between 300 and 1550m, TIanmu Mountain is well-known for its typical forest ecosystem and middle-subtropical landscape. 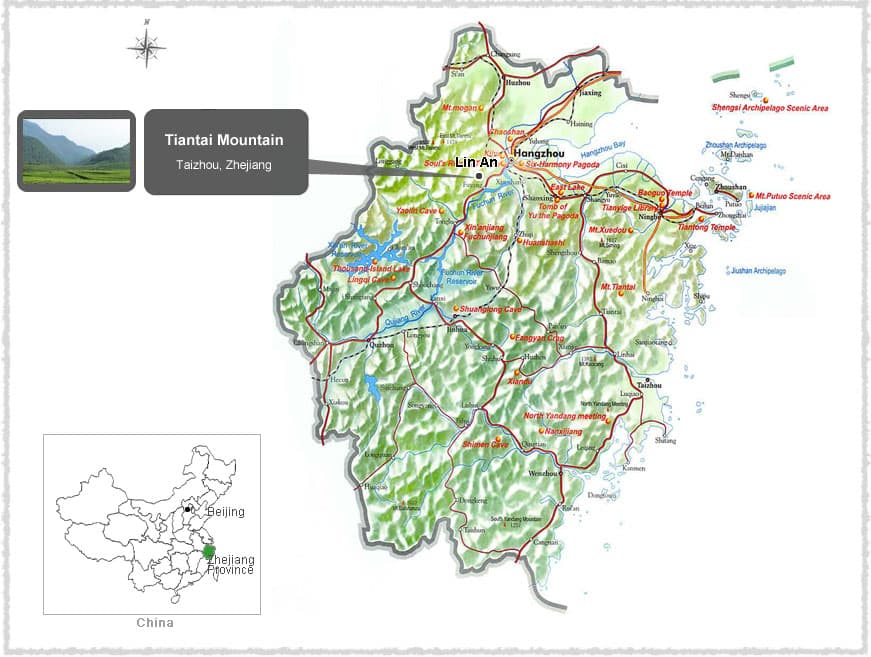 The Cuifeng tea cultivar is a type of small tree, medium-leaf variety. It is a newly bred green tea cultivar selected from a natural hybrid of Fuding Dahaocha and Yunnan large-leaf. Nowadays this cultivar is most widely grown in Zhejiang, Anhui, Hubei, Jiangsu, Jiangxi, Guangxi, and other tea producing areas in China, especially in regions south of the Yangtze River.
The leaves from this type are ideal for making high-end green teas in the tightly tied strip type, with its quality showing in its fresh taste and intriguing fragrance.