Nowadays Pu-erh tea is more and more popular both in China and Western Countries. Many people are interested in the process of both loose Pu-erh and Compressed Pu-erh. In this article we will show the steps of pu-erh cake process to all tea enthusiasts.

Nowadays Pu-erh tea is more and more popular both in China and Western Countries.  Many people are interested in the process of both loose Pu-erh and Compressed Pu-erh.  In this article we will show the steps of Pu-erh cake process to all tea enthusiasts.

The whole process can be simply concluded as following steps: 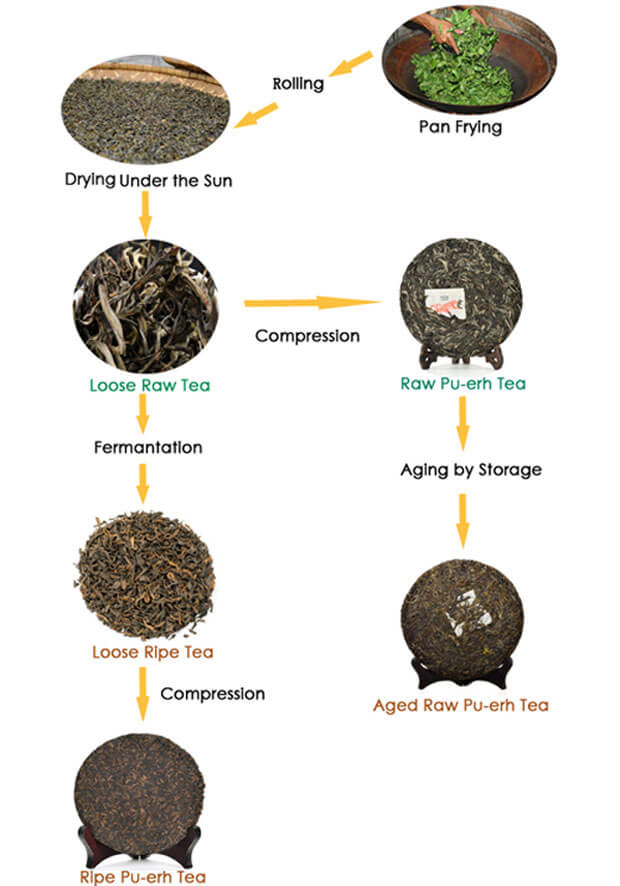 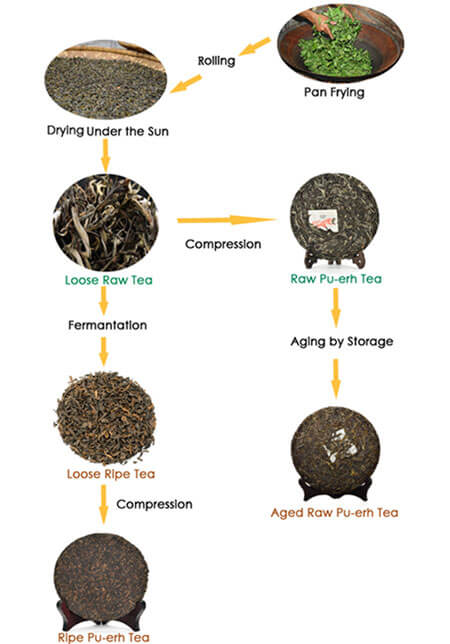 The best time for picking the tea leaves is after half an hour of sunrise in case the water containing too high which will have bad affection to withering and sha qing process.  The processes Picking, Withering, Sha Qing and Rolling usually complete between 10am to 12am.  Then following the Sun Drying before 4pm, the exact time should be according to the tea amount and weather. 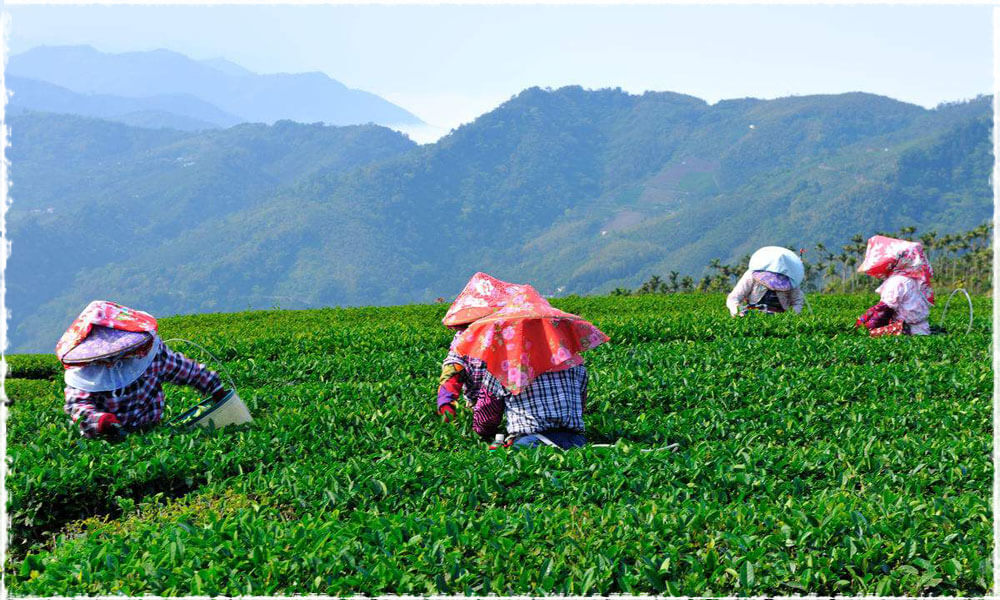 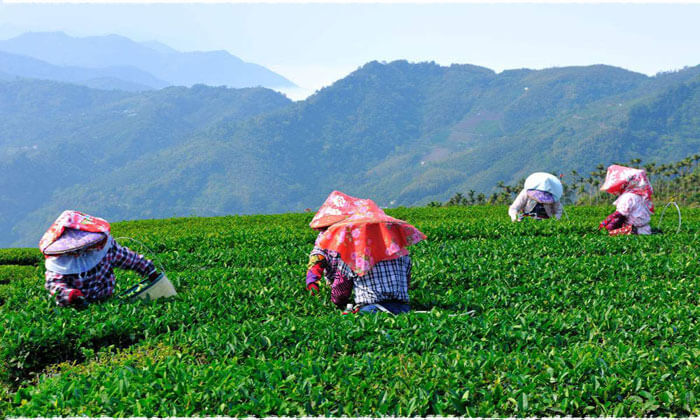 Newly picked Pu-erh tea leaves be placed on a drying table to dry for a day or two. Drying the tea leaves will remove the moisture from the tea leaves. The raw puer tea is allowed to breathe prior to being rolled. 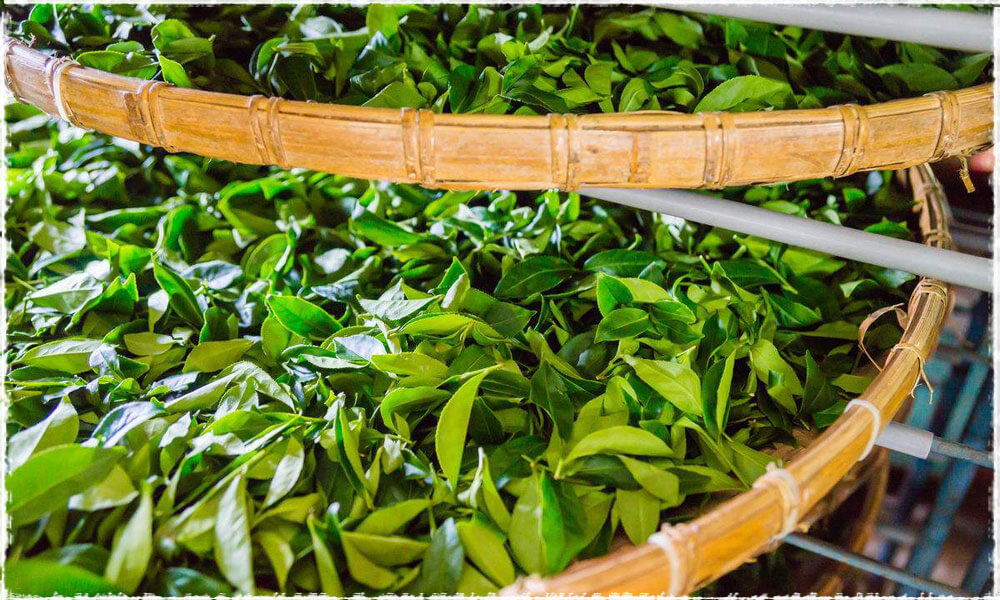 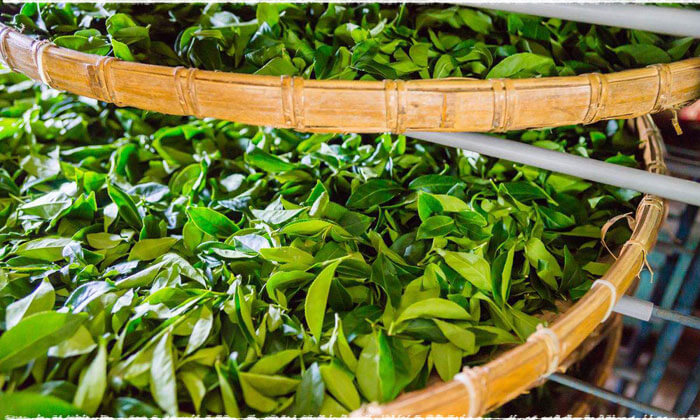 The purpose of Sha Qing is to reduce the fermentation.This process can be divided into Machine Sha Qing – steaming and Manually Sha Qing – Panning. For machine, the leaves are tumbled in an air drying machine for 3 minutes to soften them. For Manual Sha Qing, Pan Frying the tea leaves on a wok is done to “Kill The Green”. Its like making stir fried with your hands! 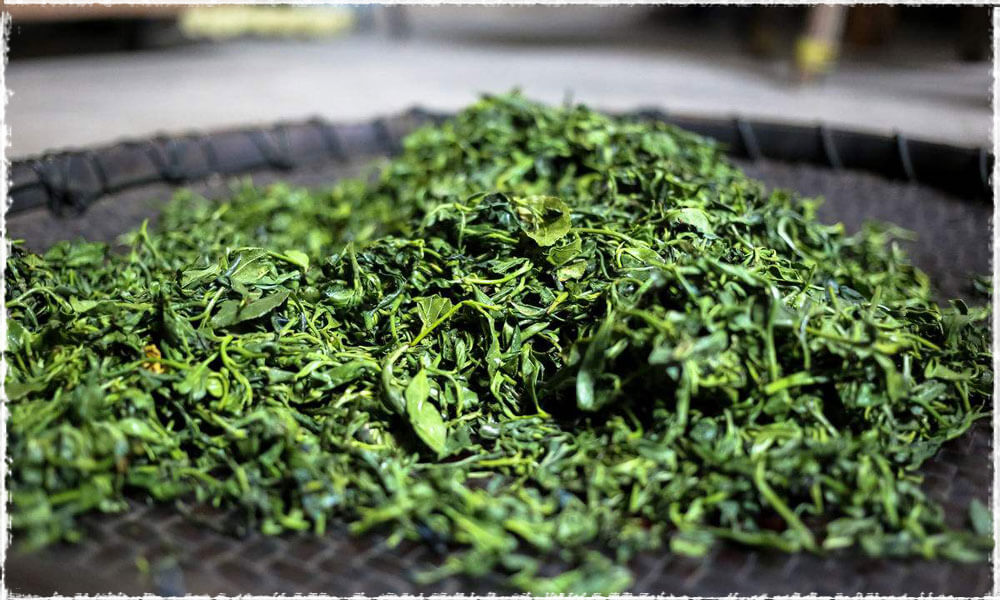 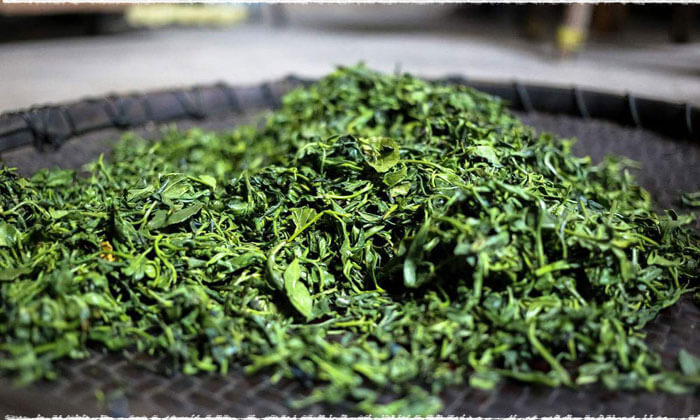 After frying the leaves “Kill-Green” the leaves are allowed to cool briefly and then are rolled and broken.  This breakage allows the leaves to release some of their potency.  Un-rolled and/or un-broken leaves would result in a pu-erh tea that would be very bland and would not age well. This process can also completed by both machine or hands. 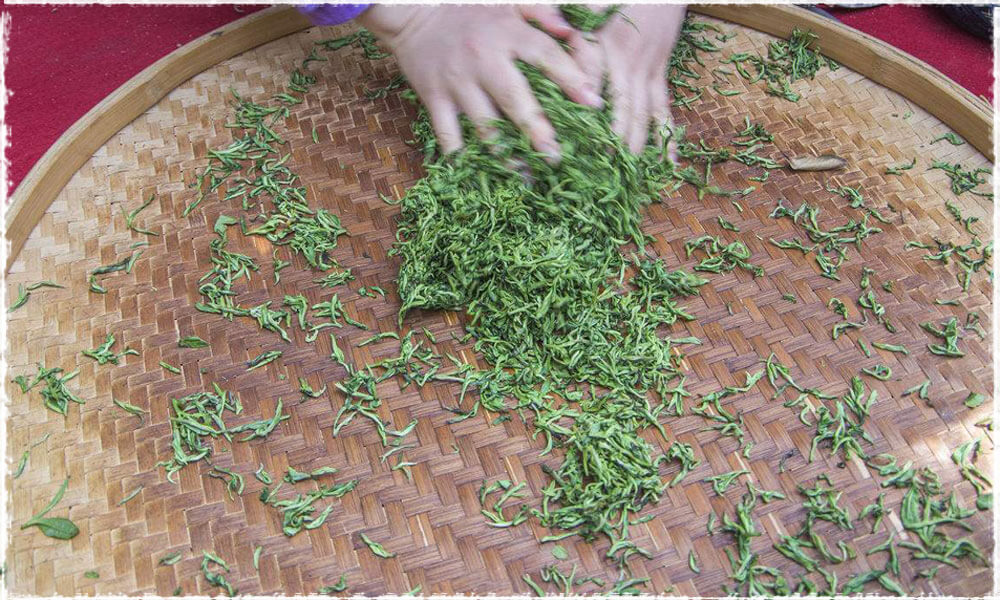 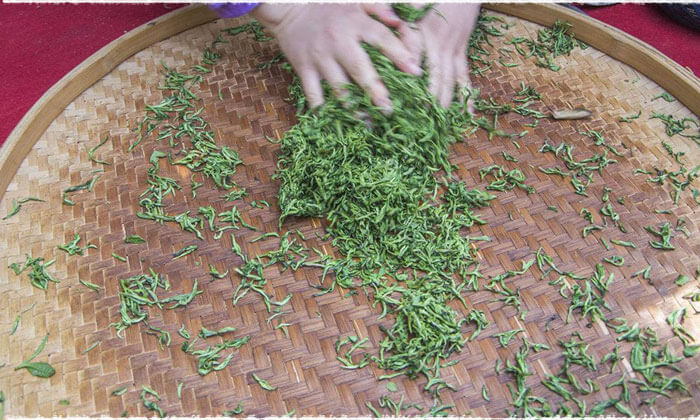 The rolled tea is then sun dried for three days.  This mao cha (raw puer tea) is used to make green and black puer. 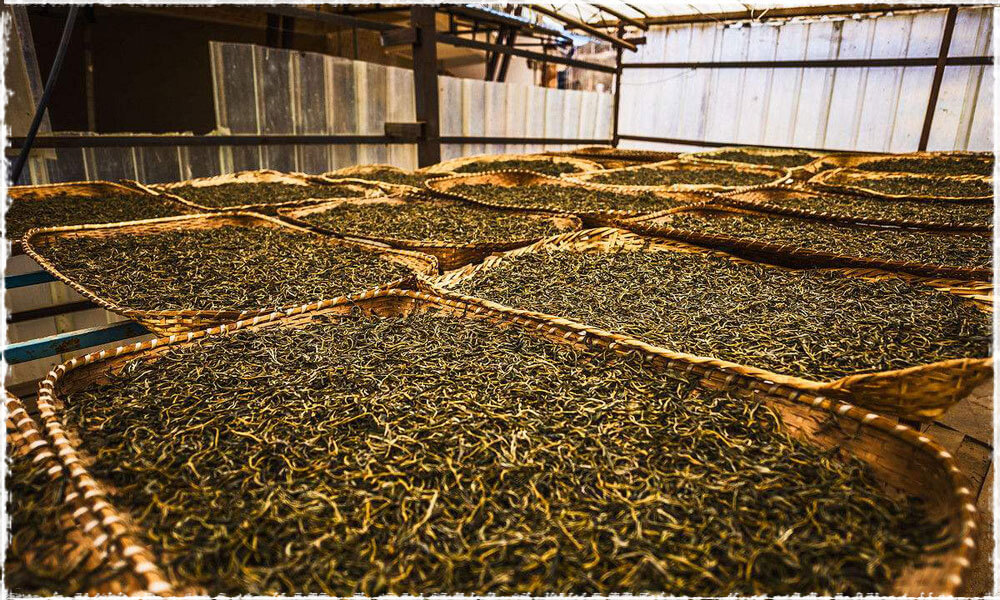 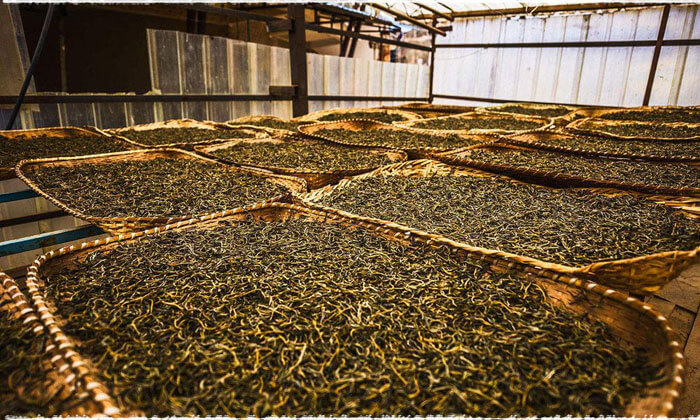 The process used to convert mao cha (raw puer tea) into ripened Pu-erh is a recent invention that manipulates conditions to approximate the result of the aging process by prolonged bacterial and fungal fermentation in a warm humid environment under controlled conditions, a technique called wòdūi (渥堆, “wet piling” in English), which involves piling, dampening, and turning the tea leaves in a manner much akin to composting. The tea is weighed and placed in the bucket.  Then it will be steamed for 25 seconds to soften the leaves and to allow the leaves to stay together when pressed.
Cloth is placed over the bucket and the tea is emptied in to the cloth.  Then tied the cloth. Put the wrapped teacake to the machine to be pressed. 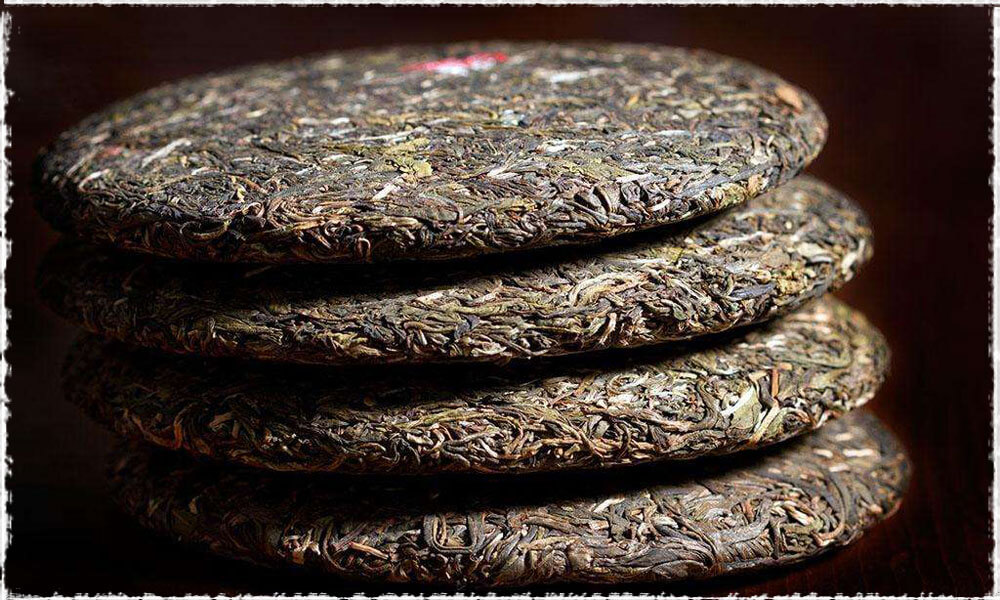 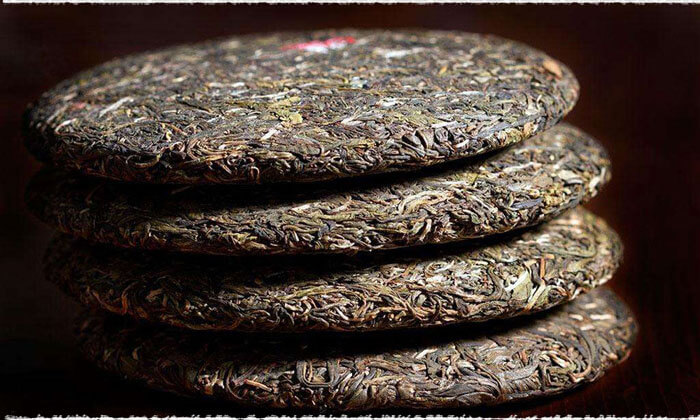 Pressed Pu-erh is removed from the cloth bag and placed on latticed shelves where they are allowed to air dry, which may take several weeks or months, depending on the wetness of the pressed cakes.

Now the puerh cake is totally produced, but as the puerh cake is tightly compressed that it is very hard to pry the tea loose from, we need to learn How to Properly Loosen and Pry Pu-erh Tea to be able to brew and drink the delicious Pu-erh tea! Also have a look at our article on How to Brew an Enjoyable Pu-erh Tea