Jian Zhan, as a representative of black porcelain, is one of the eight famous porcelains of the Song Dynasty in China. It was also already a royal tea set during the Song Dynasty. Nowadays, more and more people start to learn and like Jian Zhan, this is not only because of its unique shape and profound cultural heritage, but also because it has some magical effects. Let’s learn about them together through this article.

I. Background and History

Jian Zhan (Tian Mu Porcelain), as a representative of black porcelain, is one of the eight famous porcelains of the Song Dynasty in China. Jian Zhan was created in Tang Dynasty and the beginning of the Five Dynasties, the middle period of the Northern Song Dynasty to the middle of the Southern Song Dynasty was the heyday of Jian kilns. The outstanding achievements of Jian Zhan craft are reflected in the unpredictable and colorful glaze color, the representative glaze color is Wujin glaze, rabbit hair glaze, oil drop glaze, partridge feather glaze, yao bian etc. The shape of Jian Zhan is mainly bowl, which is simple and classic. The whole cup is heavy and hard, with grey black inner body; the glaze is thick and densely bonded with the inner body. 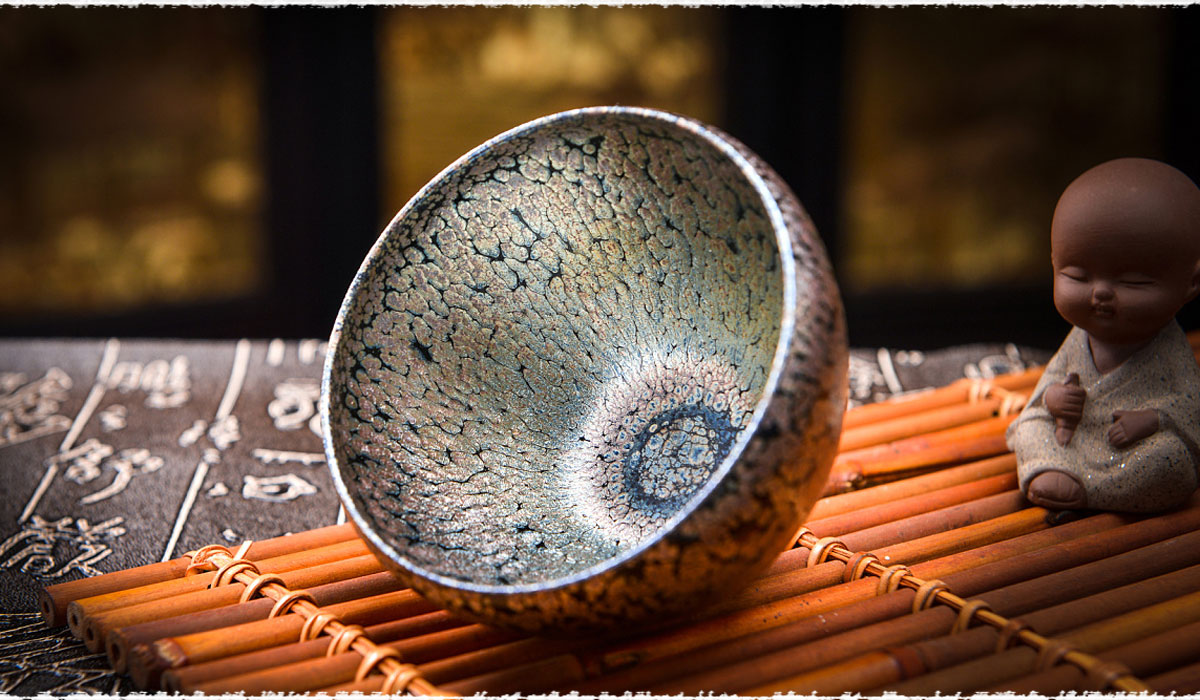 Later, the Jian Zhan culture began to decline in the early Yuan Dynasty, and vanished in the late Yuan. Until 1981, experts from a large number of institutions, such as the Central Academy of Arts and Crafts, the former Fujian Institute of Light Industry and the former Jianyang Porcelain Factory, used several years of research and experiments, and finally succeeded in firing Jian Zhan. The ancient crafts of Jian Zhan which had been vanished for more than 600 years were finally restored.

1. Clay selection. The glaze and clay of Jian Zhan need to have high iron content. Other kilns in Song Dynasty have tried to imitate Jian Zhan, but they usually cannot succeed for the minerals in their geographic location can hardly meet the standards of making a Jian Zhan.

2. Crushing. To place the prepared clay and glaze in a machine for pulverization

3. Washing and sieve. The thickness of the clay or glaze should be moderate. After sieved, the clay need to be put into the slurry tank, while the glaze need to placed in the glaze pool.

4. Chen Fu, which is a ceramic terminology, refers to place the clay in a room away from sunlight and air, keep a certain temperature and humidity, and store it for a while.

5. Knead the clay. This process is aimed to further remove the air and impurities in the clay, make the mud dense, uniform humidity, and facilitate forming, meanwhile, it also prevents the clay from drying and cracking during post-production.

7. Modification. The traditional shape of Jian Zhan is mainly shallow circle foot, and the base part and the “inner ring ” of the foot need to be modified by knife.

8. Kiln the unglazed Jian Zhan. This process can increase the mechanical strength of the clay, and also remove a part of the cracked and fragile Jian Zhan in advance.

9. Blend glaze. The glaze formula of the ancient method is to use natural iron ore glaze and plant ash. These two simple substances can compose the beautiful glaze, which looks incredible, but the craft of making Jian Zhan is to use the simplest materials to creat the most mysterious crystals.

10. Glazed. One of the big featured of Jian Zhan crafting is the half-glazed. Ancient people would specially design a glaze line to facilitate the control of the glaze range. Glazing also needs very skillful technique, ensure the glaze moderate. If thin, the room for the growth of crystal is too small to produce a delicate works; if too thick, the glaze may easy to stick to the bottom.

11. Put into the kiln. There usually need to place a layer of alumina powder on the bottom to avoid stick.

12. Kiln and fire the Jian Zhan. The kiln is the most important process of making Jian Zhan. If the time, degree and frequency of reduction are not well mastered, the desired glaze color will not be successfully created. After put into the kiln, the master must be concentrate on controlling the degree of reduction and not leave for a long time.

13. Finishing kiln. After kiln, due to various restrictions on the making process, each kiln will inevitably produce defective products, which must be disposed of on site. Products that pass the quality inspection can be sold. 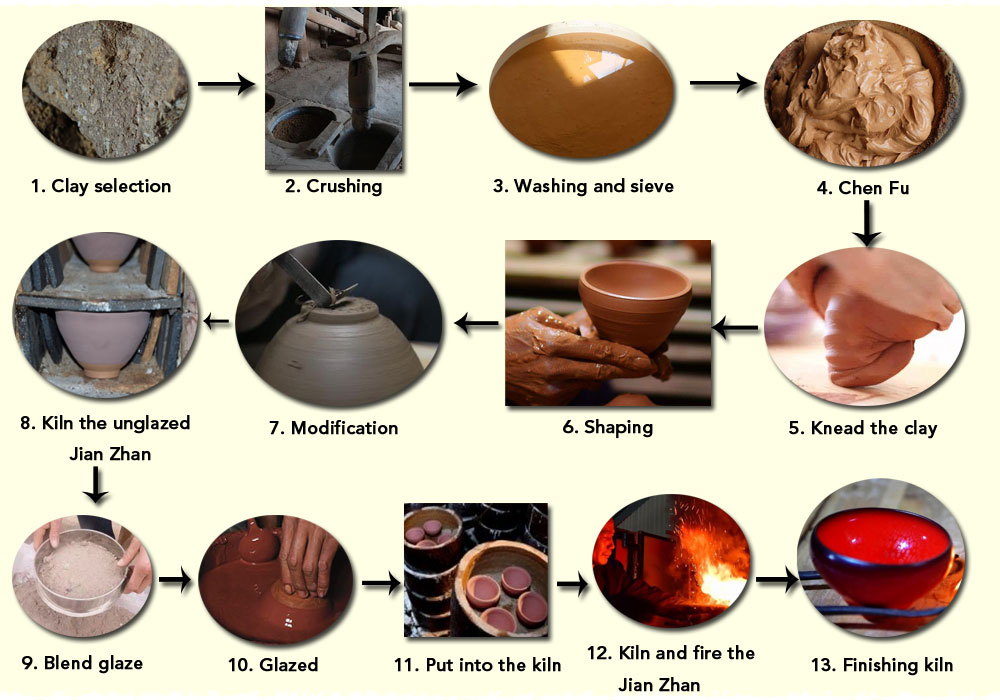 As we all know, water is the mother of tea, and the teaware is the farther of tea. If we are stricter, the burning charcoal, water, teaware, as well as the tea cup, will all affect the quality of tea. Jian Zhan looks like a simple and ordinary small bowl. In fact, it has special functional design from the initial to the final production. Therefore, using Jian Zhan to drink tea can not only keep the tea liquid warm for a long time, but also can improve the alkalinity of the liquid , thus to better inspire the tea aroma.

Many people say that no matter the liquor, water or coffee, will all become more mellow and delicious when they are in a Jian Zhan tea cup. That is because the special functional design of Jian Zhan for its iron content, sand content, as well as the thickness of the cup embryo and glaze. Therefore, using Jian Zhan to drink tea, it can help to preserve the heat for a long time and to improve the alkalinity in the tea liquid, so that to ensure the taste of tea, and also stimulate and enhance the aroma of the tea. 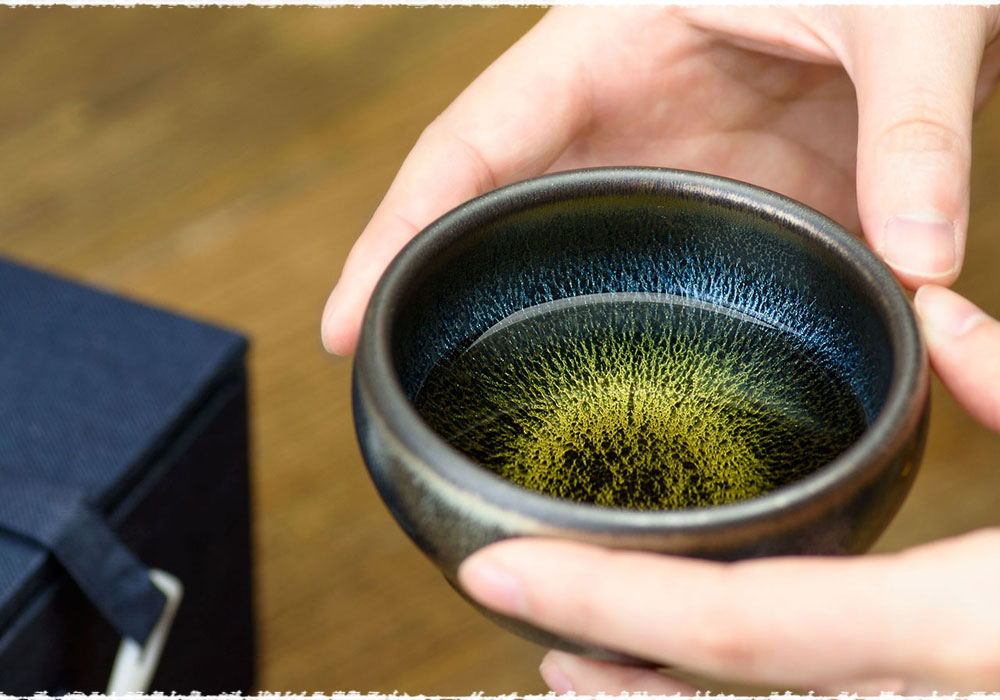 Jian Zhan’s glaze contains chemical components such as silica, alumina, ferric oxide and calcium oxide. Therefore, the high iron content in Jian Zhan can continuously release divalent iron ions during use, and also absorb the chloride ions in water. So they can be easily absorbed by the human body, thereby increasing the function of hemoglobin carrier and red blood cells. Therefore, drinking tea with Jian Zhan can help to prevent anemia, high blood pressure, regulate the central nervous system of the human body to achieve a soothing effect. In addition, it is also effective in balancing endocrine systems, which can adsorb bacteria and reverse the inhibition of the enzyme activity on which the bacteria depend, and achieve sterilization effect. 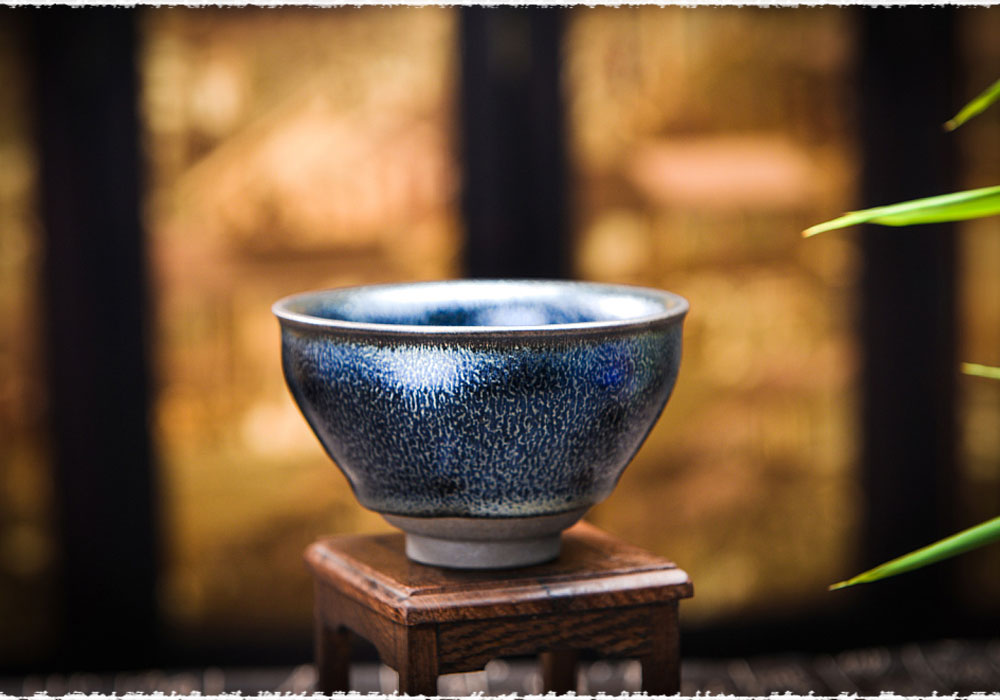 Understand the culture of Jian Zhan, the benefits of drinking tea with it. Do you want to experience the magical charm of it yourself?