Most of the utensils were pottery before the Song Dynasty in China. The arrival of the five famous kilns also signaled the arrival of the ceramic age. The five kilns were famous for their production of Chinese ceramic during the Song dynasty. They are respectively Ru kiln, Guan kiln, Ge kiln, Jun kiln and Ding kiln. 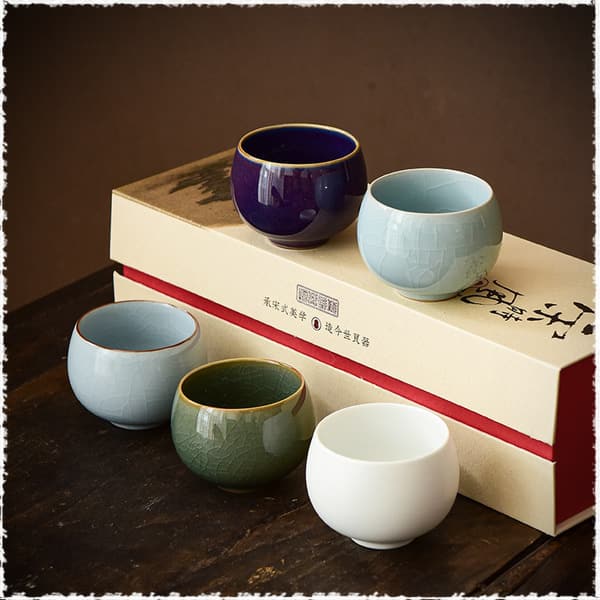 The champion of the porcelains: Ru kiln

Ru kiln was built in the late Bei Song Dynasty and was listed as the first of the five famous kilns, located in ancient Ruzhou, (now in Henan Province), was an official Kiln for the royal family. All its porcelains were featured with delicate and neat body, glaze, called “like jade, non -jade but better than jade.”

Ru kiln is famous for firing celadon porcelain, and the main glaze colors are sky blue, bean blue, pink blue and so on. The celadon of Ru porcelains contain agate in the glaze, the color is green and crystal, which was delightful for eyes and has the characteristics of “green as the sky, surface as jade”. The surface is in the form of cicada-wing pattern with small openings, which is called “crab claw pattern”.

However, Ru Kiln did not work for a long time. Later, it was invaded by the Jin army and the Ru kiln was destroyed due to the long-term military disaster, the skills were lost.

Ru kiln was only work 20 years. The porcelains ware particularly scarce in the Nan Song Dynasty due to the short firing time. There are less than 100 recognized wares that have been passed down to this day, which makes these wares very valuable.

After the demise of Bei Song Dynasty, a new kiln was built on Hangzhou‘s Fenghuang Mountain During the Nan Song Dynasty. The detailed kiln address is still in doubt. “Guan”, meaning the government in Chinese, showed that Guan Kiln was the official kiln that only produced fine porcelains for the royal family, so it is noble and rare to become people’s first impression of Guan Kiln in the Song Dynasty.

The 3 most popular glaze colors were moon white, pink green and bright green. The upper rim is a purplish color because of the thinner glaze and the lower rim with a dark iron color, there was a saying that “purple mouth and iron foot” was a characteristic of Guan porcelains.

According to legend, after the porcelains were made, the royal workers will destroy the rest after they picked. Only the fine products can be presented to the palace for the use of the royal family. Because of this, the amount of Guan porcelains in the world is extremely rare.

Although the precise location has not been determined, some academics and experts think that Longquan, Zhejiang, was the address of the kiln, which fired in the middle or late Nan Song Dynasty.

Jun Kiln began in the Tang Dynasty and flourished in the Bei Song Dynasty. The kiln location was in today’s Bagua Cave, Yuzhou City, Henan Province. It was called Junzhou in the Song Dynasty, thus the name “Jun Kiln”. Jun porcelains has traditionally been considered as the “treasure of the country” and enjoys the reputation of “Jun porcelains are priceless”.

Jun porcelains are fired twice, the first time is unglazed, then the glaze is added and fired again after the first firing. When monochromatic glazes dominated the world in the Song Dynasty, copper oxides were creatively used as colorants to produce a variety of glaze colors such as blue-red, purple spots or pure azure. It is a significant invention in the history of Chinese porcelain, called kiln change. Because copper red glaze is very sensitive to temperature and the environment in the kiln, if there is a slight difference, the red color will vary and become a bit special. However, this kind of kiln change often brings unexpected effects, therefore there is a saying that “one color enters the kiln, and get colorful porcelains “.

Another feature of Jun porcelains is that the glaze has irregular flowing lines. This is because the enamel layer is thick. During the firing process, the glaze flows naturally to fill the gaps and cracks, and the glaze is formed similar to earthworms crawling in the dirt.

Ding kiln was originally fired in the late Tang Dynasty, and prospered in the Bei Song Dynasty. The site of the kiln is in Quyang County, Hebei Province, and it was given that name since it belonged to Dingzhou in the Song Dynasty.

Ding kiln is famous for producing white porcelain and also firing black glaze. Before firing, each ware’s rim was scrubbed clean to remove the glaze. The resulting roughness of the rim, called mang kou (芒口), could be uncomfortable when pressed to the lips, so to solve the problem, and to add a further decorative feature, the rim was ornamented with gold, silver or copper rings. There are many glaze droplets hanging down on the glazed surface of the rim, shaped like “tears”.

In the early Bei Song Dynasty, the composition of carved flowers in Ding porcelains was simple, and most of them were lotus. In the middle and late Bei Song Dynasty, the carved flowers were exquisitely decorated, and carved images of different depths, with a strong three-dimensional sense. The decorative themes were generally flowers and fruits, lotus, ducks, birds, clouds and dragons. The prints are largely flowers, lotus, chrysanthemum, peony, etc., and there are also animal motifs such as mandarin ducks, dragons and phoenixes, lions, etc. The pictures are precise and symmetrical.

How to Season Yixing Teapot